comScore today released the results of its monthly rolling survey of U.S. mobile phone users for the January-March period, showing that Apple's smartphone market share rose 2.7 points from December to March, from 36.3% of total U.S. smartphone platform and hardware sales to 39%, marking a record high share for the company. 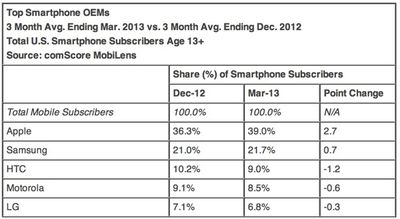 Samsung was the hardware manufacturer with the second largest share of the market at 21.7% in March, up from 21% in December. HTC, Motorola, and LG again experienced slight drops in market share, with HTC suffering the heaviest loss going from 10.2% to 9%.

Apple's share increased 2.7 points to 39%, while Blackberry continued to drop, hitting 5.2% down from 6.4% in December. Microsoft remained steady at 3%, though saw a small drop from 3.2% in February's report. Collectively, Apple and Google control 91 percent of the smartphone market, with Apple making continual gains each month.

comScore's data tracks installed user base rather than new handset sales, which means it is more reflective of real-world usage but slower to respond to shifting market trends than some other studies.

CrazyForApple
I hate it when people say Apple is doomed.
Score: 17 Votes (Like | Disagree)


Most people following MacRumours for any period of time would realize that there's an incredible bias towards "Apple good, everyone else bad, Samsung is the spawn of Satan" in a large number of the posts. (Although the Samsung part is fairly recent, since Samsung has been kicking Apple's butt.)

"Market share" was dismissed as unimportant when Apple was a computer company and Apple OSX was in the single digits.

Now that many of the Itoys are slipping, "market share" is being dismissed again. And, even worse, Apple fans are bringing out the tired old "shipped doesn't mean sold" mantra - as if retailers would continue to order devices that weren't selling.
Score: 8 Votes (Like | Disagree)

PracticalMac
but, but, but, the price of shares are falling!

Mr. Gates
And yet paying their fair share of taxes to the country that allowed them the opportunity to prosper is unthinkable.

Folks, why do you think Apple has so much money and almost every one else in the US is in debt ?

We don't really care for marketshare. But since android fanboys do. we just like to remind them once a while that apple is winning in market and profit share then we will watch them cry. :rolleyes:


Two years ago, you heard about nothing but marketshare from the hardcore contingent. It was always heralded as an example of how the best sells because people want the best.

But as soon as Apple lost the majority stake in the mobile sector...pfft...gone. It's now an unimportant vector.
Score: 6 Votes (Like | Disagree)