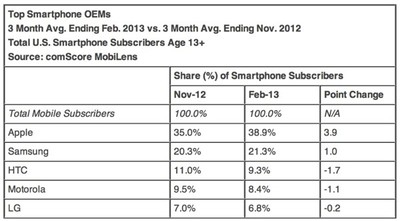 Samsung was the hardware manufacturer with the second largest share of the market at 21.3%, up from 20.3%. HTC, Motorola, and LG all experienced slight drops in market share.

Apple's share increased 3.9 points to 38.9%, while Blackberry came in at 5.4% (down from 7.3%) and Microsoft experienced a slight jump from 3% in November to 3.2% in February. Collectively, Apple and Google control over 90 percent of the smartphone market, up from 87% last month.

comScore's data tracks installed user base rather than new handset sales, which means it is more reflective of real-world usage but slower to respond to shifting market trends than some other studies.

I thought Apple was going out of business.


They are...in the bizzaro world of Wall Street and Samsung marketing bias.
Score: 24 Votes (Like | Disagree)

I thought Apple was going out of business.
Score: 22 Votes (Like | Disagree)

Ryth
Wonder what Fandroids are going to make up as an excuse now...

Obviously, now that Apple is moving into all sandboxes in the US, the proof is in the pudding that Androids market share was only because Apple was not on every carrier.

Just wait till they get into India and China more and South America...
Score: 16 Votes (Like | Disagree)

Wonder what Fandroids are going to make up as an excuse now...

Obviously, now that Apple is moving into all sandboxes in the US, the proof is in the pudding that Androids market share was only because Apple was not on every carrier.

Just wait till they get into India and China more and South America...

This doesn't make Android phones or the iphone any better or worse. So what's your point
Score: 10 Votes (Like | Disagree)

What is says is one of these is absolutely wrong. You can't have one be so different and the other be so different. Obviously there is a serious flaw in someones data analysis.


Which of course could be the one posted here. ;)
Score: 9 Votes (Like | Disagree)
Read All Comments

Saturday July 31, 2021 12:13 am PDT by Tim Hardwick
Telegram Messenger has received a major update to its video capabilities, including support for video calls with up to 1,000 viewers. Group video calls in Telegram allow up to 30 users to stream video from both their camera and their screen, and now a maximum of 1,000 people can tune into the broadcast. Telegram says it intends to continue increasing this limit "until all humans on Earth...
Read Full Article • 52 comments

Saturday July 31, 2021 6:00 am PDT by MacRumors Staff
This week saw an interesting range of Apple news and rumors, including a blockbuster earnings report, rumors about next year's "iPhone 14" and Face ID coming to Macs, and more. Subscribe to the MacRumors YouTube channel for more videos. Other popular topics included Apple's crackdown on leaks, changes in the latest round of betas for iOS 15, iPadOS 15, and macOS Monterey, and several stories...
Read Full Article • 46 comments