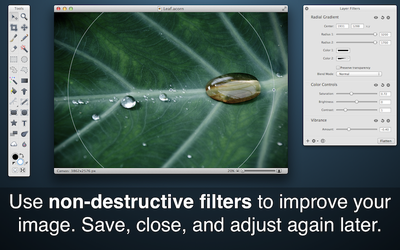 The developer claims that the new version of Acorn is "a lot faster than its predecessors" in a variety of ways, including applying filters and selections and working with large images. New features like non-destructive filters also improve workflow speed, allowing users to try filter combinations without overwriting the original image data.

Layer styles and filters are now merged together into a happy new UI. Chain filters together to create endless combinations of unique effects knowing you can always change your mind later on.

Non-destructive filters aren't the only new part of Acorn, as the entire program has received a "new coat of paint" while the tools palette has been split off into its own window and a new filter HUD, called Merlin HUD, has been added, which will allow users to manipulate the radii and center points of their filters on the canvas.

I WAS the one

I'd be interested as well, as I too find Pixelmator is often frustratingly counter-intuitive-not to mention highly unstable.


Unstable? I've been using Pixelmator for a while and to this date Pixelmator works great. I gotbit running on an 2007 iMac 24 core 2 extreme with maxed ram.
Score: 2 Votes (Like | Disagree)

AdeFowler
A great looking app for the price and I wish the developers well, but until it has CMYK support it cannot be considered as a true Photoshop alternative. Thats not me being snobbish, its just a fact of life for a huge percentage of Photoshop users.
Score: 2 Votes (Like | Disagree)

Been there, tried that. I still have two filters, one of them displays completely garbled preview (so I cannot see the way the shadow is going to look like), the other does not display any preview at all. Without the preview, it is still better for me to make shadows the "duplicate-fill-blur" way. Maybe you know a working filter?

And I'm not bashing Pixelmator. Let's put it that way: using Pixelmator, I can still make that drop shadow effect by hand, although not as fast as in Photoshop. Using Acorn, I just cannot transform several layers simultaneously, and there seem to be no way around this, other than transforming each layer one by one.


You have to download Quartz Composer, use it to open the Quartz filters that are garbled or where preview doesn't work (I had something like 28 to change so I know the drill now :p) --then open the Parameters tab --then select the default Preview image icon and delete it. I spent Saturday afternoon doing this based on the instructions on the following link and all the filters that were buggy after the Cherry update are working again.
http://support.pixelmator.com/viewtopic.php?f=6&t=3429&start=50 (http://support.pixelmator.com/viewtopic.php?f=6&t=3429&start=50)
Score: 1 Votes (Like | Disagree)

I WAS the one

Yes, I know how to make a shadow by hand, but honestly all this layer copying, blurring and copying again just to get a shadow in Pixelmator is quite annoying.


Shadows are easy with Pixelmator... It seems you just want to get results the Adobe way. Go search for Quark Filters and install them and you will see how easy to do shadows is with Pixelmator. Yes. The old filters works great. Please master an app before bashing it. I own Phostoshop, Pixelmator and Acorn. Al of them are great, Photoshop is expensive that's why Pixelmator is my next photo editing app, Acorn is cool but I return to Pixelmator everytime.

And about the crying on CMYK pixelmator also works with thar too. Is a basic feature now but it will be better on every update.
Score: 1 Votes (Like | Disagree)

I agree with Ade. Without CMYK (and control over total ink coverage), no program is an adequate substitute for Photoshop.

Okay, it won't work for you. I'm a web developer, so for me, CMYK images are a bug, not a feature - and Acorn works quite well for me as a Photoshop replacement. (On the other hand, I would love to see more support for indexed color images, but it's not a dealbreaker.)

Anyone know if there is a further discounted price for users of version 3-3.5?

The web site says the $30 price is "for everybody." I bought my copy through the App Store, which doesn't support upgrade discounts, so that might be a part of that. At any rate, I don't think $30 is unreasonable for a program like this if you do a fair bit of image editing and want something more Mac-friendly than GIMP.

What's the difference between this and Pixelmator? I've used the latter and found it even less intuitive than Photoshop for some tasks.

In my opinion, Acorn's interface is more sane. Pixelmator seemed to be unnecessarily flashy and hip. Acorn also has a "Web Export" feature which isn't quite as useful as Photoshop's "Save for Web" but is still better than just "Save As…". A lot of people swear by Pixlemator, though, and it is cheaper. Acorn has a demo available on their site, so you can give it a try

At any rate, I'm glad to see more support for layer styles and other non-destructive stuff. I think those things are very useful, and an area where Photoshop held a big lead for a long time. I haven't upgraded yet, but I will.
Score: 1 Votes (Like | Disagree)

saturnotaku
Anyone know if there is a further discounted price for users of version 3-3.5?
Score: 1 Votes (Like | Disagree)
Read All Comments