Adobe is offering customers a 20% spring discount on some of its editing software (via AppleInsider), dropping the price of Lightroom 4, Photoshop Elements 11 and Premiere Elements 11 by $30.

Lightroom 4, originally priced at $149, is designed for photographers, offering up an array of powerful image adjustment tools. Though Adobe recently launched a beta version of Lightroom 5, the updated software will not be released until later this year. 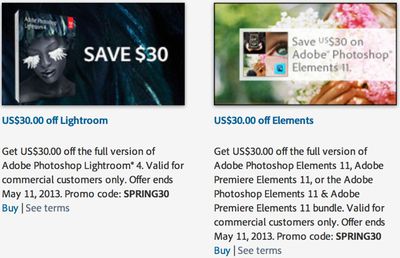 The discounted software can be purchased directly from Adobe using the code "SPRING30," until May 11 when the promotion ends.

canyonblue737
Lightroom 5 will be out by JUNE not much more than a month away. Don't buy now.
Score: 3 Votes (Like | Disagree)

Well we do know that Lightroom is due for an upgrade - we already have the first public beta after all. I haven't heard anything about the Elements programs so they are probably further off after the next CS update.

If I was a betting person I would say about 5-6 months for Lightroom and maybe 8 months to a year for the Elements programs based on nothing official from anybody and just my intuition.

Take it with an ocean of salt.

You are betting wrong. LR4 only had one beta and was launched less than 4 weeks after it came out (with a surprise price cut bringing it lower in cost than LR3 which was selling at 20% discount!). It appears LR5 is following the same model and it times out in June so the full version will launch before then. I think Adobe is speeding up the releases of LR from one every 18-24 months to once per year (with less new features as a result) to offset having to sell the product at a lower price to compete with Aperture.

I think there is a decent chance that Adobe drops the price on LR to $99 or LOWER (if they want to match Aperture at $79ish) but that it goes to a no upgrade / once per year release schedule. I think that many of these 10/20% or $40 off deals on LR4 will actually end up costing MORE than LR5 which is weeks away from release...
Score: 2 Votes (Like | Disagree)

The convenience of the Mac App Store is unparalleled.
I'll pay for that.

flottenheimer
Wondering if SPRING60 or even SPRING90 would work as well. :)

But hey, Adobe, I'd happily pay full price, if Lightroom was on the danish Mac App Store. Come on.
Score: 1 Votes (Like | Disagree)

laflores
Newegg is giving $40 off in Lightroom
Score: 1 Votes (Like | Disagree)
Read All Comments