We have analyzed domestic NPD retail data for the months of January and February which suggests Mac sales were up 14% y/y through the first two months of the March quarter. As we have previously discussed, we believe the Y/Y improvement is driven by Apple beginning to improve supply of iMacs as the company noted the product was constrained in the December quarter. CEO Tim Cook noted that iMac sales were down 700k units y/y in December (we note iMac sales are likely far less impacted by iPad, thus the vast majority of the y/y unit decline in December was likely supply).

Despite the strong performance, Munster is maintaining his estimate of an overall 5% decline in worldwide Mac sales for the quarter, even though Apple's worldwide numbers have frequently outperformed the U.S. data gathered by NPD.

On the downside, NPD's data shows a return to Munster's expectations for the iPod, with the two-month timeframe seeing sales down 16% year-over-year compared to Munster's projections for a 17% decline. iPod sales had been up 3% in January.

While strong Mac sales are a good sign for Apple, the increasing dominance of the iPhone and iPad in the company's product portfolio means that strong Mac sales have less of an impact on Apple's overall financial performance. In the most recent quarter, Macs accounted for just 10% of Apple's revenue, compared to 20% for the iPad and a dominant 56% for the iPhone.

Stupid iMac is so thin who would buy it?!

No Mac Pro? Apple will meet its demise!
Rating: 25 Votes

johncrab
AH, but 14% growth isn't good enough for the lemmings of Wall Street. Never mind the collapsing economy and the economic miracle that Apple is. They are not delivering 150% increases quarter after quarter. Whaaaa! 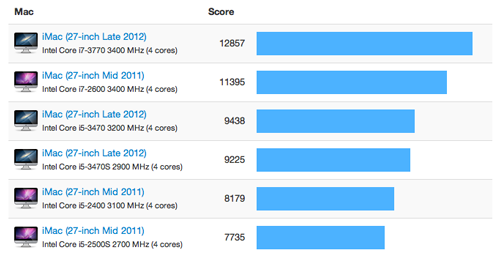 The high end iMac is about half as much as the current Mac Pro... and it's almost on par with the Mac Pro from 4 years ago. The gap will be widened significantly once the new Haswell Mac Pros are released. Now please troll elsewhere.
Rating: 7 Votes

Rocketman
With Mac at only 10% of revenue and PC sales declining, it might be time for the Mac-Midi expandable, single chip 4 core i7 Mac. And a stackable external enclosure. If all they do is cannibalize PC sales, it would be a winner. As you know all Macs run Windows!

We have long since needed a Mac that could replace all the utility purposes commodity PC's are installed into. Premium price and quality okay! TCOO is very low. It might need a parallel and serial port option! Okay if it immediately converts to the internal USB/PCIe bus. :D


And with GPU-like computing and next generation Xeon CPU's, a Mac Pro would keep the performance threshold to a next generation mobile device, performing realtime raytracing, multilayered 4k stereo video at 48 fps and sophisticated fluid simulations. Technology development does not stop at the low-end.
Rating: 6 Votes

vmachiel
Awesome. No matter what people say about iOS being dull or iPhone not innovating enough, the Mac is kicking ass comparing to windows.
Rating: 6 Votes

The high end iMac is about half as much as the current Mac Pro... and it's almost on par with the Mac Pro from 4 years ago. The gap will be widened significantly once the new Haswell Mac Pros are released. Now please troll elsewhere.

A tower is for different needs than a laptop. Laptops are good writing machines and field tools. Not a nr.1 workstation.
Rating: 5 Votes