Following Tuesday's seed of the latest beta, Apple today released OS X 10.8.3 to the public. The update brings several enhancements including support for camera redemption of gift cards in the Mac App Store to mirror functionality introduced for the iTunes Store in iTunes 11 last November. 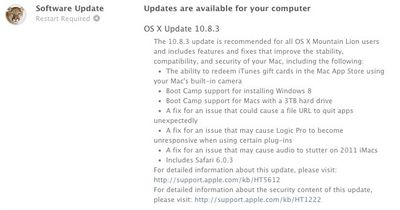 The 10.8.3 update is recommended for all OS X Mountain Lion users and includes features and fixes that improve the stability, compatibility, and security of your Mac, including the following:

For detailed information about this update, please visit: http://support.apple.com/kb/HT5612

With 13 different beta seeds for developers, OS X 10.8.3 spent three and a half months in testing before seeing a public release. The public version of OS X 10.8.3 is the same 12D78 build provided to developers on Tuesday.

We decided to also run tests on our 2012 15-inch MacBook Pro with Retina Display (rMBP). We privately tested each beta build of 10.8.3 on both MacBooks as they were released and, starting with build 12D76, we saw a noticeable jump in battery life on the rMBP. Running time went from 398 minutes, which was roughly the same as the public release of 10.8.2, to 421 minutes, a change that persisted with the final build. These are averaged results that we ran three times to confirm.

Windows 8 would suck on a Mac, since there's no touch screen

Steve.P.JobsFan
Breaking news today out of Cupertino: White smoke can be seen from the smokestack upon Apple's headquarters -- they've finally chosen their candidate for the 10.8.3 update, and have released him into the public. :p
Score: 38 Votes (Like | Disagree)

keysofanxiety
Holy crap! Now that this has happened, my money's on the PowerBook G5 being released tomorrow ;)
Score: 23 Votes (Like | Disagree)

madsci954
I think this is the equivalent of the Vatican yesterday.
Score: 20 Votes (Like | Disagree)
Read All Comments