The Mac Observer followed up with more extensive testing showing a similar 33% drop in battery life on a test machine following the upgrade to OS X Mountain Lion, and also finding that OS X 10.8.1 improved battery life over the original Mountain Lion release. The improvements did not, however, bring battery life back up to the levels seen under OS X Lion.

With OS X 10.8.2 now well into testing, The Mac Observer has performed its most complete set of tests yet, not only testing the effect of moving from OS X 10.8.1 to Build 12C35 of OS X 10.8.2 on battery life, but also looking at upgrades from OS X Snow Leopard to OS X Lion.

Just as we saw in our previous tests, the upgrade to 10.8 Mountain Lion decreased battery life significantly, by about 1 hour and 45 minutes, or 30 percent. The upgrade to 10.8.1 restored about 30 minutes of battery life for our MacBook Pro, an improvement for sure, but not nearly enough to regain lost ground.

The big change came with 10.8.2, which is still undergoing developer testing. Using the latest build, 12C35, we saw a tremendous increase in battery life, to the point where running time was a few minutes longer than even that of 10.6.8. 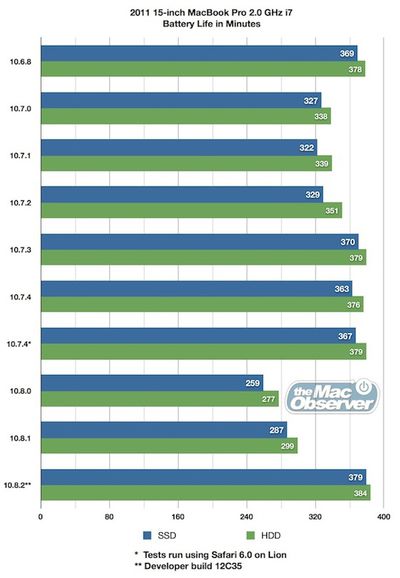 In addition, the study shows that users experienced a similar but smaller effect on battery life with the introduction of OS X Lion, an issue that was not fully resolved until the release of OS X 10.7.3 over six months after the public debut of OS X Lion.

Not all notebook users have experienced significant battery life reductions under OS X Mountain Lion, and thus it is unclear exactly what the root cause of the issue is. But for those who have been suffering from the problem, it seems that OS X 10.8.2 may deliver a resolution that will restore full battery life to their machines.

D.T.
Lost my power adapter, running on battery right now, hope this comes out in the next 2 hours and 38 minutes ...
Score: 86 Votes (Like | Disagree)

edk99
Am I reading this right that a SSD has a shorter battery life then a HDD? I would of thought something with moving parts used more power then something that has no moving parts. :confused:
Score: 41 Votes (Like | Disagree)

And I'm not talking about the ~5 minutes differences here, from what I've read SSDs were supposed to significantly increase battery life.


Hi guys; I performed the tests for The Mac Observer. As I explained in the article, we were also confused as to why the HDD was getting better battery life than the SSD. We looked into it and discovered that our hard drive, a Western Digital Scorpio Blue, is extremely power efficient, using .59 watts at idle and 1.4 watts while active.

Some low speed, energy efficient HDDs have closed the gap in power consumption with SSDs, but YMMV.
Score: 25 Votes (Like | Disagree)

Xenomorph
But is Safari snappier?
Score: 20 Votes (Like | Disagree)

Apple are you listening. Far too many products - hardware and software are being released that clearly need months more development testing. You mojo will be lost sooner rather than later if this continues.