An app that hides the standard apps on the iPhone like Stocks or Newsstand has evaded Apple's App Store approval process.

'HiddenApps', a free download on the App Store, lets users hide Apple's stock applications, disable iAds, and access the hidden Field Test mode, according to iDownloadBlog. It is likely that the app will be removed from the App Store very quickly, as other apps that have broken App Store rules have disappeared quite quickly in the past. 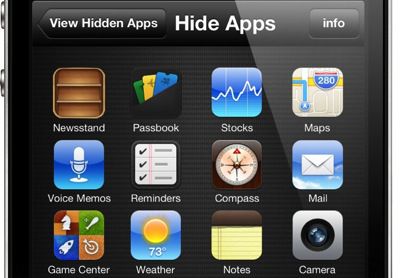 HiddenApps is available for all non-jailbroken iOS devices.

iTunes release notes cleverly bill it as “a simple and easy app that shows you tips and tricks about your iDevice,” but the developer, of course, mentions at his web site the iAd and app hiding features.

Hiding stock apps normally requires a jailbroken device, so this program should come in handy for all non-jailbroken people other there.

Better hurry up, though, and download HiddenApps while you can because I’d bet my shirt that it won’t be available on the App Store for much time.


HiddenApps is a free download from the App Store, while AppAdvice has an explanation of how to actually use the app. [Direct Link]

Update: Apple has removed HiddenApps from the App Store.

D.T.
I hid all my apps including HiddenApps, now my phone is a desolate, icon free wasteland ...
Score: 41 Votes (Like | Disagree)

BlazednSleepy
Or you could just make a junk folder.
Score: 30 Votes (Like | Disagree)

Dwalls90
HOW do these pass the app store "evaluators"? LOL, the title alone is a dead give away.
Score: 15 Votes (Like | Disagree)

b0nd18t
Apps come back after rebooting is pretty annoying. Better off creating a junk folder.
Score: 14 Votes (Like | Disagree)

jayducharme
This is one thing that infuriates me about Apple's policies. This app (which I found out about too late) is something that some people obviously wanted. There are Apple apps that I have no use for, but which clutter up my iPhone. My solution was to simply make a folder called "Apple" and I dumped the offending apps there. But really -- why can't Apple simply allow us to delete the apps we don't want? If we need them again in the future, we can simply re-install them like other apps. Apple's policy for which apps I'm forced to have makes no sense.
Score: 13 Votes (Like | Disagree)

Arran
What else is this app doing that it shouldn't?

No thanks.
Score: 13 Votes (Like | Disagree)
Read All Comments