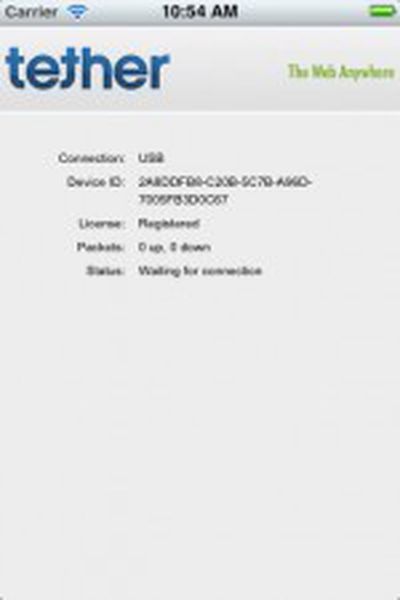 Tether.com has somehow gotten App Store approval for their iPhone companion application "iTether". The $14.99 App Store app allows users to share their iPhone's internet connection with their Mac or PC computer over USB.

Tether is an application that allows your Mac and PC to take advantage of your smartphone's data plan, providing you access to the Internet on your laptop anywhere there is cellular coverage from your smartphone.

Tether is easy to install, easy to use, works practically anywhere, and is very cost-effective.

Running both apps on your iPhone and your Mac allows your Mac to use your iPhone's internet connection over a USB cable (no Wi-Fi or Bluetooth support). Apple has traditionally not allowed such applications to become available on the App Store due to agreements with carriers.

Back in 2008, Apple briefly approved another tethering app called Netshare but quickly pulled it from the App Store. Instead, users have been expected to pay additional fees to U.S. carriers such as AT&T and Verizon who offer tethering as an add-on service for $20/month. The approval of iTether may have been inadvertent by Apple again and could be pulled at any time. It is presently available in the App Store for $14.99. As in the case of Netshare, if Apple does pull the app from the App Store, it should continue to work for those who bought it.

Tether offers a similar app for both BlackBerry and Android platforms and has been reviewed in the NYTimes and Entrepreneur.com.

We should note that excessive unauthorized tethering has previously resulted in warnings from AT&T to users about their usage. In many of these examples, however, the unauthorized use was dramatic and on unlimited plans. Still, it is good to be aware of that possibility. [App Store Link]

Update: Tether's website is presently down due to the traffic, which means you can't download the Mac/PC apps and it also appears the iOS app verifies with Tether.com on each run, so it won't work while the main website is down.

Update 2: Tether claims "We were very clear with Apple what our app did. They asked us a bunch of questions and then approved us." So it may not be getting pulled.

ArcaneDevice
Hands up if you are outside North America and still laughing at the idiocy of having to buy permission to use other devices through your cell data plan.
Score: 11 Votes (Like | Disagree)

ignus graius
I'm a little concerned that I dropped $15 on an app so easily.
Score: 7 Votes (Like | Disagree)

macduke
I can verify that this app does work. Don't hesitate people! This is Netshare all over again. MOVE MOVE MOVE!

I'm posting this using my iPhone's data connection. Only issue so far is that if I close the app on my iPhone and reopen it, I have to restart the app on the Mac side. Otherwise it works like a dream!
Score: 7 Votes (Like | Disagree)

This story and thread is very funny and intertaining to follow as a longtime Android user who's been able to wireless tether my crappy little overclocked $120 LG Optimus V smartphone rooted and custom rom'ed with Gingerbread bumblebee 2.2.3. I've never once had to pay a single extra dime to tether - being that my cheap but highly useful Android phones data plan is unlimited via Virgin Mobile. I pay 27.50 a month an unlimited 3g data plan with 300 anytime minutes (which I never fully use each month). My totally contract-free, pay as you go Android phone can operate at speeds that at leat approach the performance of a iPhone 3G, and even a 4G when I overclock the phones CPU to by up to 60%. The phone also has the neat little ability to side-load all of my potential content - bypassing any official iTunes- like gauntlet to install my apps, music, movies, or whatever other content I choose via the phones memory expanding 32GB micro SD card. I also can swap out the battery anytime I need to for a freshly charged new one at will.
This last September while vacationing for several weeks in a remote seaside resort, I was able to exclusively use my LG Optimus V as my sole WiFi hotspot - providing enough bandwidth for myself and another friend visiting me for the last week of my visit. We were both quite able to very comfortably surf the web, email, text, do some light downloading --- also uploading to my dropbox, and even stream a bit of non-HD video on our MacBook Pro's without so much as a data hick-up, stall, or glitch. It was so impressive, that my die-hard iPhone iOS friend is now looking into getting an Android smartphone of his very own so that he can finally be completely free to use and abuse his phone data and it's wireless data capabilities as he so desires - without gimmicks, usb cables, fear of having any big bag AT&T TeleMonster looking over his shoulder and threatening him with having to pay extra $$$$ for more data BS charges.
There is even an iPhone refugee forum @ VM that has countless other formerly self-imprisoned and price-gouged iOS/iPhone consumers that just can't believe how much more open and customizable they can get on a non iOS platform - being finally able to do the simplest of mobile tech things like: wirelessly tethering their Android phone to most any other WiFi and/or bluetooth capable device - even with most of Apple's WiFi capable devices such as any Macbook pro. I regularly wirelessly tether my WiFi only Motorola Xoom tablet to my LG Phone - instantly converting it to a 3g Tablet wherever I can pick-up a signal (which is almost always nearly 5 bars most anywhere I have traveled within the continental US).
It's really inconprehensible that there are still millions of folks out there paying Apple/AT$T/Verizon an average of nearly $100 a month (and much more for those who do officially use the outrageously over-priced tethering data plans via the exclusive iPhone carriers).


But your phone is a piece of crap.
Score: 6 Votes (Like | Disagree)
Read All Comments

Sunday May 22, 2022 1:57 am PDT by Sami Fathi
Apple has silently increased the price of its Apple Music subscription for college students in several countries, with the company emailing students informing them their subscription would be slightly increasing in price moving forward. The price change is not widespread and, based on MacRumors' findings, will impact Apple Music student subscribers in but not limited to Australia, the...
Read Full Article • 181 comments