Samsung has paid $112 million for a 3% stake in LCD screen manufacturer Sharp, a key supplier of LCD screens to both Samsung and Apple, reports The Wall Street Journal. 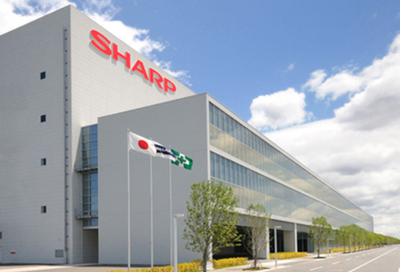 Sharp currently holds the technical lead in the manufacture of large-screen LCD panels, enabling it to produce TV screens bigger than 60 inches at a lower cost than other manufacturers. Despite this advantage, the company has been struggling financially over the last 18 months, laying off 11,000 staff and mortgaging key assets.

Sharp has been desperately seeking external financing to keep itself afloat, having received bank bailouts and receiving a $120 million investment from Qualcomm late last year. Foxconn was also set to make an investment in Sharp, but that deal has fallen apart as Sharp's financial picture has continued to deteriorate.

Sharp supplies LCD panels to both Apple and Samsung, including both iPhone and iPad screens, and a WSJ blog suggests that Samsung may gain priority in future supply deals.

Monex market analyst Toshiyuki Kanayama said a Samsung-Sharp tie-up could "help Sharp to at least raise the efficiency of its panel-producing plant, as it will ship products to Samsung, whereas it had prioritized supplying components for Apple."

Samsung’s bid to turn Sharp, once a major competitor, into an ally, shows how serious it is in winning a global battle with Apple for dominance in the lucrative market for mobile devices.

Samsung has been focusing its own screen manufacturing efforts on OLED technology, with analysts observing that closer ties with Sharp would help the company outsource more of its LCD production.

First Samsung copies Apple's products and now they copy the strategy of securing parts. What next?


Yeah, cause Apple invented business strategy. I hope they patented it too!
Score: 17 Votes (Like | Disagree)

Don't see why Samsung would help a competitor.... even if it's due to financial issues.

They probably need some competition to be alive and somewhat healthy so that they don't get in trouble for having a monopoly and getting in potential trouble for being accused of abusing it.

Same way as it was back in the days a smart move of Microsoft to inject some money into failing Apple - they needed that competition to be alive and breathing to protect themselves from possible law suits.
Score: 11 Votes (Like | Disagree)