Bloomberg briefly notes that hedge fund Greenlight Capital has unsurprisingly dropped its lawsuit against Apple over a company-backed proxy proposal that had bundled together several provisions including a move to limit Apple's ability to issue preferred stock to investors without explicit shareholder approval. Apple CEO had previously called the lawsuit a "silly sideshow" and reiterated that view at Wednesday's shareholder meeting.

The withdrawal comes after a judge had preliminarily blocked a vote on the issue at Apple's shareholder meeting, with Apple officially withdrawing the measure from the balloting. Apple has said that it remains committed to addressing the preferred stock issue, but will have to do so at a later date. 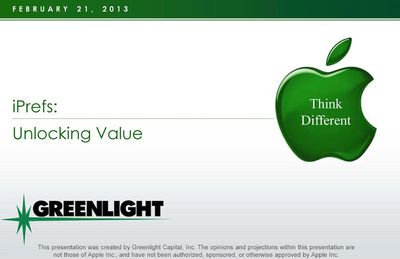 Greenlight's David Einhorn has become very vocal about trying to "unlock more value" for shareholders, and Apple has acknowledged that it is having discussions about how it might accomplish that beyond the existing dividend and share buyback programs initiated last year.

While I wasn't in favor of the issuance of preferred shares, I do like the fact that Greenlight was trying to unlock value in Apple shares. I'm not aware of any other company or executive team that has sat idly while over $200,000,000,000 in market cap was wiped out in a matter of months.

Trouble is that much of that was due to analysts and their BS. Not anything Apple did

Apple gives guidance that they believe they can do $100 million in a quarter, some analyst says he thinks Apple can do $150 million. Apple does $125 million which 'disappoints' the analyst who says they must have had production issues on something etc. investors sell because of analysts comments, not keep it or even buy more cause Apple beat their estimate (and the previous record of $110 million in a quarter)
Score: 2 Votes (Like | Disagree)

While I wasn't in favor of the issuance of preferred shares, I do like the fact that Greenlight was trying to unlock value in Apple shares. I'm not aware of any other company or executive team that has sat idly while over $200,000,000,000 in market cap was wiped out in a matter of months.


Good managers ignore Wall Street and focus on their business. The ones that pander to Wall Street are the ones you have to worry about. Tim and mgmt did a great job of growing the largest company in the world by over 25% last quarter, YoY, and they generated over $20 billion in cash flow. Those numbers are staggering... to put that in perspective, that's more than what Google made the entire year!

You have to keep in mind that the market's driven mostly by sentiment and there's no logic behind it. One successful quarter or new product like an iWatch, and Apple will quickly be back over $700. The good news is, Apple is cheap now so you can buy more shares and collect dividends until the stock rebounds.
Score: 2 Votes (Like | Disagree)

...
... The good news is, Apple is cheap now so you can buy more shares and collect dividends until the stock rebounds.

That is the way to look at it. If the price moves down it is good thing for many people and bad for others. For every sellers who lost there is a buyer who got a good deal. Mostly this depends on your age. For older people closer to retirement the price gong down is bad but if you are under 40 and have time to wait then you should be looking for good deals to buy. The younger investor can take more risk and can wait out a market fluxulation.

r2shyyou
Read literally, it sounds ridiculous that it's illegal for consumers to unlock phones but hedge funds can sue companies to "unlock" value (aka money)...
Score: 1 Votes (Like | Disagree)
Read All Comments

Sunday September 25, 2022 6:50 am PDT by Sami Fathi
Apple may decide to release its remaining products for 2022, which include updated iPad Pro, Mac mini, and 14-inch and 16-inch MacBook Pro models, through press releases on its website rather than a digital event, according to Bloomberg's Mark Gurman. In his latest Power On newsletter, Gurman said that Apple is currently "likely to release its remaining 2022 products via press releases,...
Read Full Article • 187 comments

Monday September 26, 2022 7:34 am PDT by Sami Fathi
Today marks exactly two weeks since Apple released iOS 16 to the public. Besides the personalized Lock Screen, major changes in Messages, and new features in Maps, the update has also seen its fair share of bugs, performance problems, battery drain, and more. After major iOS updates, it's normal for some users to report having issues with the new update, but such reports usually subside in...
Read Full Article • 220 comments