Today iFixit released its first "Tablet Repairability" list, which ranks some of the more popular tablets by ease of repairability. The majority of Apple's tablets found themselves near the bottom of the list with a rating of 2/10.

The list was based on iFixit's findings from its teardown work. Two of the biggest reasons for low repairability scores were excessive adhesive and a high probability of breakage during disassembly. The majority of Apple's iPad family were guilty of one or both of those symptoms.

The lone Apple tablet with a good repairability rating was the original iPad with a 6/10, notching in below the Nexus 7 on the list. The only negative for the original was that the battery was difficult to remove or replace.

The list doesn't include every tablet released, but it does include some of the more popular ones like the various Kindle Fire models and the Samsung Galaxy Tab. The top tablet on the list was the Dell XPS 10 with a 9/10, while the Microsoft Surface Pro scored worst with a 1/10.

In the past other Apple products, like the 15-inch Retina MacBook Pro, which received a 1/10, have also received criticism for being difficult to repair from the iFixit team.

AngerDanger
They should have another rating to the right, showing how likely these devices will need repairing. 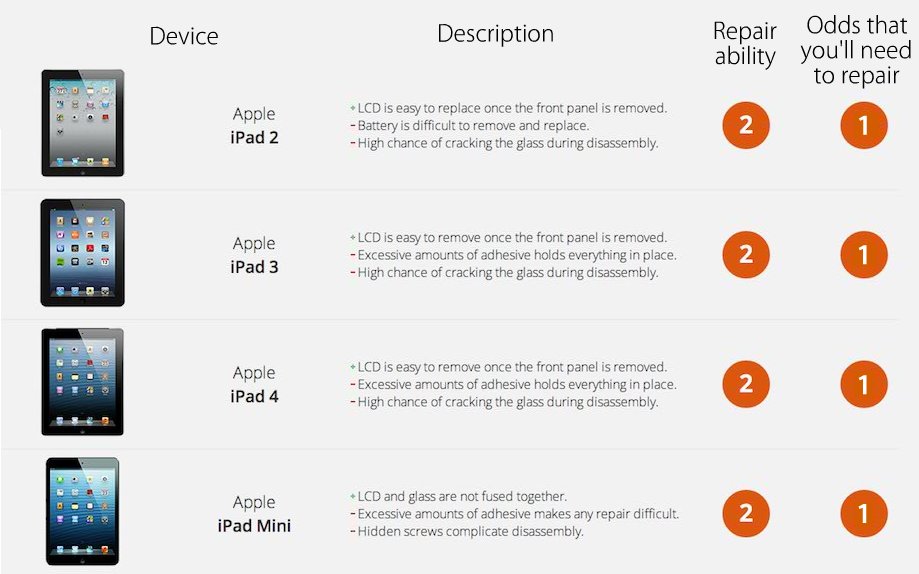 GeekLawyer
I can't imagine any scenario in which I would want to attempt to fix or repair my iPad.

AppleCare pushes the score to 10 for me.
Score: 10 Votes (Like | Disagree)

leman
Well, iFixit makes money out of repairs. They are approaching the point where they are not able to repair them for less than what Apple charges. Of course they will be furious. I do find it hilarious though how they complain about difficulties of battery change on the rMBP and yet Apple will do it for you for $200.
Score: 5 Votes (Like | Disagree)

Chupa Chupa
The "Report" should be called the "Products we can't make money from selling spare parts, so they suck" Report. I love iFixIt and also regret the days when I could repair and upgrade my machines is all but over. It's the end of an era. I'm moving on with the next. iFixIt should too and find a new niche to fill lest their next report will be a Chapter 7 filing.

Depends on who's using it. My almost three year old brother shattered the glass of the iPad 2 within 3 months of use. The tablet is still functional though.

So while the internals of the iPad are very unlikely to fail, the glass is easy to break, and will require repair. In fact I think it's very common occurrence with tablets in general.

Most iPad users are not 3 y.o., and adults that let their 3 y.o. play with them should have the brains to put it in a child proof case... they do make those. 3 y.o. are known for tossing things around on a whim which is why everything Fisher Price is heavy duty plastic.

Most older kids and adults users don't end up with shattered iPads.
Score: 3 Votes (Like | Disagree)
Read All Comments