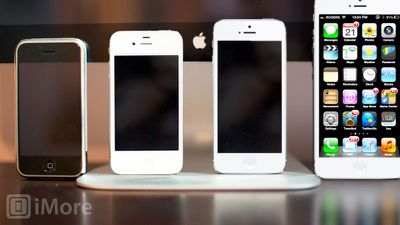 3.5" iPhone, 3.5" iPhone 4, 4" iPhone 5, and (mockup) 5" iPhone by iMore
Brightwire translates a report from the Chinese media which claims that Apple will be launching both an iPhone 5S and a 5" iPhone 6 this year:

- A source told Chinese mobile phone information site Laoyaoba.com that he has seen the iPhone 5S and iPhone 6 at Apple's suppliers. Both models may be released in 2013, according to the website's microblog on Thursday evening.
- The source noted that the iPhone 5S resembles the iPhone 5, and the five-inch iPhone 6 is lighter and thinner.

This rumor adds to a chorus of reports that Apple is seriously considering a larger form-factor iPhone in the near future. While early reports had suggested that such a model wouldn't see the light of day in 2013, later reports continue to point to a 4.8"-5.0" device coming soon from Apple.

All these rumors have generated a significant amount of speculation on how such a larger model might make sense in Apple's iPhone lineup, especially when comparing it to Samsung's current offerings.

Due to Apple's use of Chinese manufacturers and the need to prototype their designs, it's possible that all of these sightings could be true, yet Apple may still not launch such a device in 2013. If Apple does begin ramping up production for 2013, we expect we'll see parts of this larger device to also begin to leak out of China.

Ljohnson72
Have fun backpedaling on all the "this screen is the best size" marketing.
Score: 60 Votes (Like | Disagree)

kot
Apple has been doomed since the time it started following market trends, not setting them, and even worse, following Samsung. Oblivion is all they deserve.
Score: 53 Votes (Like | Disagree)

Fatalbert
Ew, 5" screen?? If they actually release this, which I doubt they will, I just hope they'll still have the 4" version. Why anyone wants 5" is beyond me, but it's only a personal preference.
Score: 46 Votes (Like | Disagree)

Apple has been doomed since the time it started following market trends, not setting them, and even worse, following Samsung. Oblivion is all they deserve.

Rather silly. And very wrong.
Score: 18 Votes (Like | Disagree)

willywonkapple
I have had every major iPhone release... I don't really care what they do with hardware at this point. It's always beautiful, always feels great and is the best available when it's released..

I care about the tired OS. I'm really bored with it at this point... I bought an iPhone 5 in the fall and I'm thinking of giving it to my wife and jumping ship after all these years... It sucks because I'm so deep in the apple ecosystem... I have iPads iMacs MacBooks POWERBOOKS Apple TV's iPods and iPhones... but this will most likely be my last...