Mockups of a 4.94-Inch 'iPhone Plus' Show Why a Larger iPhone Might Make Sense

Amid rumors of a significantly larger "iPhone Math", Instapaper developer Marco Arment has spent time developing some speculation and a few mockups showing how Apple could achieve an iPhone with a nearly 5-inch without disrupting the existing app ecosystem.

The recently rumored, larger-screened “iPhone Math”, or more likely “iPhone Plus”, is plausible as an additional model (not a replacement) alongside the 4” iPhone. And there’s a good chance that it would have a 4.94”, 16:9 screen.

The theory is easy to understand: perform John Gruber’s Mini-predicting math backwards. The iPad Mini uses iPhone 3GS-density screens at iPad resolution. What if an iPhone Plus used Retina iPad screens with iPhone 5 resolution, keeping the rest of the design sized like an iPhone 5?

In the scenario put forth by Arment, an 1136x640 screen matching the iPhone 5's resolution but blown up to the Retina iPad's 264 pixels-per-inch resolution would measure 4.94 inches diagonally.

At an iPad-like pixel density of 264 ppi, Apple could have a hard time positioning the iPhone Plus as a Retina device given that a phone is assumed to be held closer to the eye than a tablet, but some consumers may still prefer the option of having a larger screen to offer more flexibility such as being able to zoom out further on text or view small text with the device held further from the eye.

Arment offers several other mockups showing what Apple's iOS device lineup would look like with a larger iPhone in it, as well as how users could take advantage of smaller font sizes on the larger screen to show more text.

Why did anyone actually waste their time in making these composites? :confused:


Yes I dont know how I cope walking about with this Plasma TV in my pocket. Look how dinky the iPhone 5 looks next to it. :D 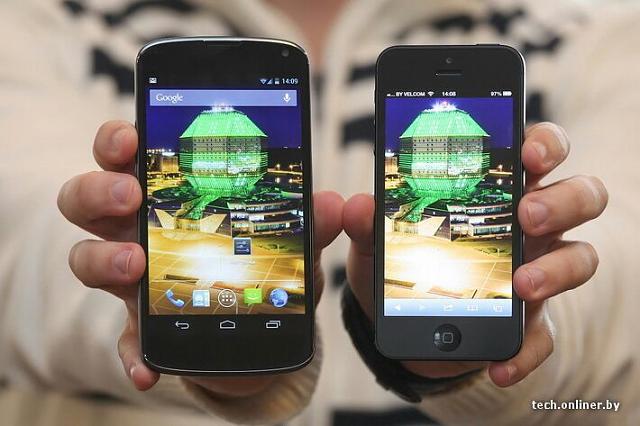 MTL18
Ugh, this is the end for Apple. Exploring new markets for potential increased revenue.

How dare they not innovate more!

Sorry for the sarcasm, just wanted to get that in before the drama queen's rain down!
Score: 37 Votes (Like | Disagree)

mcfrazieriv
Why did anyone actually waste their time in making these composites? :confused:

Added:
Originally Posted by burnside: "Why did you waste your time with that comment?"

Because it isn't a waste of time to stop and wonder why people would take time to do what has historically not worked in the past? Apple nearly died when they decided that innovation wasn't as important as providing choice. Remember the early 90's when there were so many Apple models that had only one or two differences and how each of these models clouded/confused the customer?
Score: 27 Votes (Like | Disagree)

While the "iPhone Plus" would not be able to display more pixels than the iPhone 5, Android devices have demonstrated that larger screens are popular with consumers.

Larger screens are popular PRECISELY because you can fit more information and content there. Not because of larger pixels.

This would be so useless.

Also, 16:9 sucks for phones. It's too narrow in portrait and short in landscape. See how narrow it feels?

Anti-Lucifer
For the love of jesus christ, why don't you just stick with 1280x768 or use an actual HD resolution, apple!?

You're just making it hard on yourself for any sort of proper design upgrades because your iPhones have really stupid resolution dimensions.
Score: 21 Votes (Like | Disagree)
Read All Comments