One of the fastest-spreading stories of the weekend has been a strange OS X Mountain Lion bug that can crash almost any Mac app running any version of OS X 10.8, reported on Open Radar.

The initial bug report stated that typing 'File:///' (without the quotes) into almost any app causes the app to crash. 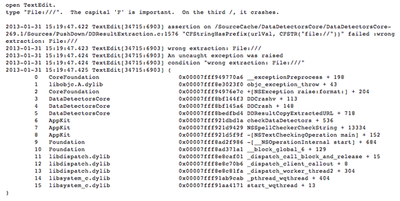 Follow-up testing has shown that the final character needn't be a forward-slash, with almost any character after 'File://' triggering the bug. The issue is also speed-dependent: leaving a brief pause between typing // and the next character will prevent the crash from occurring.

More embarrassingly still for Apple, filing a crash report causes both Crash Reporter and the Console apps to crash. The Console crash can only be cured by running a terminal command:

The Next Web has a detailed analysis of the issue, noting that it is related to Apple's Data Detectors feature for automatically recognizing dates, locations and other information in text for addition to Address Book or Calendar entries.

While it is rather surprising that the issue took so long to receive publicity, Apple is now likely to include a fix for the problem sooner rather than later. It is, however, unknown whether Apple will squeeze a fix into the upcoming OS X 10.8.3 that has been in developer testing for over two months.

More embarrassingly still for Apple, filing a crash report causes both Crash Reporter and the Console apps to crash.


Laughed way more than I should have.
Score: 37 Votes (Like | Disagree)

AngerDanger
Ugh. I just tried to contact an Apple representative about this, and as soon as I described the problem, they hung up on me. This bug goes deep, man.
Score: 25 Votes (Like | Disagree)

iMacFarlane
Wow, amazing bug. So big brother is watching, logging, analyzing. You could just be in the middle of typ
Score: 11 Votes (Like | Disagree)

EmpyreanUK
You're typing it wrong.
Score: 10 Votes (Like | Disagree)

dearfriendx
Yeah, this is SO utterly embarrassing. Most of the world is required to type 'file:/*' into most apps these days. Their stock is going to plummet :(
Score: 9 Votes (Like | Disagree)
Read All Comments

Friday July 23, 2021 8:07 am PDT by Sami Fathi
Yesterday, DigiTimes claimed that the upcoming iPad mini will feature a mini-LED display, but now, display analyst Ross Young is going at odds with that report, claiming that while the updated iPad mini continues to be on track for a release this year, it won't feature a mini-LED display. Young says he "confirmed" with Radiant Opto-Electronics, who DigiTimes claims would provide Apple with...
Read Full Article • 59 comments

Friday July 23, 2021 8:23 am PDT by Mitchel Broussard
Apple's MacBook Pro and MacBook Air lineup is seeing all-time low discounts across the board today, including the 2019 16-inch MacBook Pro, 2020 13-inch MacBook Air, and 2020 13-inch MacBook Pro. Note: MacRumors is an affiliate partner with some of these vendors. When you click a link and make a purchase, we may receive a small payment, which helps us keep the site running. 13-Inch M1...
Read Full Article • 14 comments