Apple today issued a notice to European distributors indicating that it will halt sales of the Mac Pro in Europe and select other countries as of March 1 due to new regulatory requirements going into effect on that date. The move will affect all European Union countries, as well as EU candidate countries and the four European Free Trade Association countries: Iceland, Liechtenstein, Norway, and Switzerland.

As of March 1, 2013, Apple will no longer sell Mac Pro in EU, EU candidate and EFTA countries because these systems are not compliant with Amendment 1 of regulation IEC 60950-1, Second Edition which becomes effective on this date. Apple resellers can continue to sell any remaining inventory of Mac Pro after March 1.

Apple will take final orders for Mac Pro from resellers up until February 18th for shipment before March 1, 2013.

Countries outside of the EU are not impacted and Mac Pro will continue to be available in those areas. 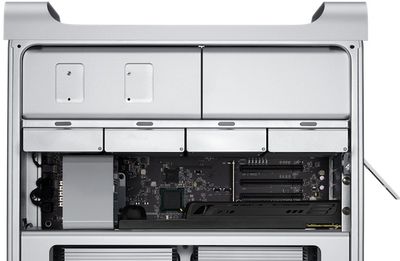 It is currently unclear exactly what aspect of the regulation the current Mac Pro will fail to meet.

Apple has uncharacteristically announced that a redesigned Mac Pro is due in 2013 after a lackluster update in June 2012 that included still-outdated processors and no other seemingly obvious improvements like USB 3.0 or Thunderbolt.

Update 10:17 AM: Macworld provides a bit more detail on where the current Mac Pro fails to meet the new regulation.

[U]nfortunately for EU customers, the Mac Pro does not comply with this standard, due to issues with power provided to its I/O ports and the placement of its fan guards. The Pro is the sole Apple product to fall under this ruling, likely due to its build - the desktop computer hasn’t had an overhaul since 2010, with a minor speed bump last June.

Update 10:21 AM: Apple has issued a statement to The Loop confirming the halt for Mac Pro sales, but not offering any additional detail on the situation.

"Due to evolving regulatory requirements, Apple will stop selling Mac Pro in EU, EU candidate and EFTA countries on March 1, 2013," an Apple representative told The Loop. "After that date, resellers can sell existing inventory but Apple will no longer ship Mac Pro in those countries."

"The Mac Pro met the previous standards prior to the amendment 1 addition. Obviously it's a very safe and very reliable product," added the company.

At issue are the large fans within the Mac Pro. Since they are unprotected, it would be possible to touch the fan blades.

"The new requirements necessitate fan guards and some increased protection on the ports on the electrical system," explained Apple.

ipedro
This makes it ever more urgent for Apple to release their Mac Pro 2013 soon!
Score: 62 Votes (Like | Disagree)

AZREOSpecialist
A company sitting on over $130B in cash and who just posted record year-over-year sales and profits (over $13B) should be ashamed of themselves for not updating their flagship product. You can't tell me that Apple hasn't made a conscious decision to let this product die. Apple is such a large company and they can't update the Mac Pro to current industry specs for over two years? Something doesn't sound right...
Score: 39 Votes (Like | Disagree)

mrsir2009
Not that anyone in their right mind would be buying this now anyway...
Score: 35 Votes (Like | Disagree)

You realize this is something Apple has no control over right? This is a government regulation.


You realize this is because apple has not updated their outdated product to keep up with regulations?
Score: 31 Votes (Like | Disagree)

steveash
We've all known Mac Pros are radioactive for years, just nobody wants to talk about it. :D

This opens the door for the new Mac Pro which will be 2mm thick and use SD cards (soldered to the logic board) for mass storage...
Score: 25 Votes (Like | Disagree)

First the Java blocking debacle, now this. This is one big FU today from Apple to business/enterprise customers.

Remember that Tim Cook only promised new MacPros for "later in 2013", this could leave Europe without a stock of MacPros for a few months.

Does sound like third or fourth calendar quarter 2013 to me. Not good if you need a new professional Mac this spring or summer in Europa. High and dry. Ebay might be your last resort.

All iToys all the time. Full steam ahead.


You realize this is something Apple has no control over right? This is a government regulation.
Score: 22 Votes (Like | Disagree)
Read All Comments