Bloomberg reports that Apple is to open its first store in Berlin, in the upmarket shopping district of Ku'damm. 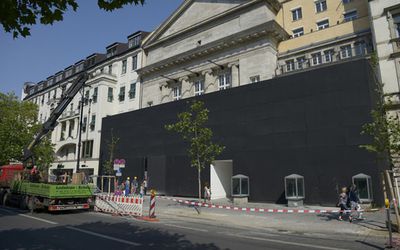 The store, for which Apple began hiring over a year ago, will be in a former movie theatre at Ku'damm 26, opposite the Hard Rock Cafe and close to the city's most famous department store, Kaufhaus des Westens. The area is home to Berlin's biggest concentration of luxury shops, including Hermes and Louis Vuitton.

San Francisco real-estate website Socketsite meanwhile reports that Apple is to open its fourth San Francisco, CA store at 400 Castro Street, a former Bank of America building recently vacated by Diesel after a reputed 50% hike in the rent. A separate area of the building has remained vacant for two years after a Sprint store closed, suggesting that Apple may plan to combine the two spaces.

The building featured in the 2008 movie Milk, starring Sean Penn as the gay rights activist Harvey Milk, the city's first openly gay supervisor who was assassinated in 1978. A memorial to Milk serves as the entrance to the subway station.

Update: Castro Biscuit reports that Apple is in fact not interested in the 400 Castro location, as it is too small for the company's needs.

MNT
That building in SF is right across from the Castro Theater, right in the middle of the Castro District at the intersection of Market and Castro. Great location for a store. I hope they're bringing back the rainbow logo for this one!
Score: 6 Votes (Like | Disagree)

RolyPolyBird
Ku'damm is a lame location for an Apple store, it is a "has been" location. They should have found somewhere in Mitte.

And Gravis is going to be in serious trouble, they are going to have to diversify or something.
Score: 3 Votes (Like | Disagree)

how about a store in lansing michigan instead? we don't have any here...


Yeah, unfortunately we are in no man's land here. Can't get a Trader Joe's or Whole Foods either.
Score: 2 Votes (Like | Disagree)

My first thought was, "Apple doesn't already have a store in Berlin...?"

in the old days, we would sit at the bar at Hagenstr. 5 and teach the girls to sing.


I don't think you are giving us the whole story! ;)
Score: 1 Votes (Like | Disagree)
Read All Comments