Following the premiere of Ashton Kutcher's new film Jobs at the Sundance Film Festival, a number of publications have posted reviews of the flick which is scheduled to arrive in theaters nationwide on April 19. The first video clip of the movie was released earlier this week. 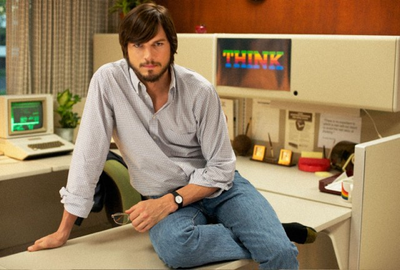 A biopic about a great man that's way too aware of his greatness, jOBS tells us a lot about the genius of Steve Jobs, but doesn't show us much of anything that actually reveals it.

But, overall, jOBS works. The lead actors are likable and appear to have put serious effort into getting the spirit of the characters right. The film looks (mostly) good aside from some of what could likely be ascribed to budgetary constraints. And though the director is a tad indulgent here and there, it doesn’t take away from the overall feeling of ‘decent’ that I came away with.

As expected, there are some liberties taken with Apple’s story and even / especially the representation of some characters — but the emotional resonance of Steve Jobs himself is convincing. It’s not revisionist history, and it’s not some greater parable about the human spirit. Jobs is a point-A-to-point-B story about a uniquely innovative thinker and ruthless businessman — one that had a notable and meaningful impact on the world. It’s a good film, but it’s also very “safe” — a familiar story that doesn’t try for a bigger picture.

Others will write of the things "jOBS" omits, gets wrong, or simply avoids. My primary disappointment was in how shallow the film felt, given the extensive historical record. In the early days Jobs' co-workers had to wrestle with a man who smelled bad, who cried often, who yelled constantly, who missed deadlines, who overspent his budget by millions. He did it in service of products we love and use daily, and yet his obsessions took a toll on those around him. He also inspired others to do the best work of their lives, pushing themselves further than they ever imagined they could go. There is great drama to be found in all that, but it is not to be found in the saccharine "jOBS."

Other reviews are available from The Hollywood Reporter, Slashfilm, Indiewire, and the Salt Lake Tribune.

Lancer
They should have used Noah Wyle :)
Score: 18 Votes (Like | Disagree)

It used to be called 'jOBS' in homage to the iPod naming style. They have since changed it to 'Jobs'.

Lark.Landon
I really don't trust critics any more. I'd prefer to see the film and make my own judgement. :apple:
Score: 5 Votes (Like | Disagree)

bobringer
But the obvious question though...

Has CNET's review been approved by CBS? Doesn't Microsoft advertise on CBS? Has Microsoft had their proper editorial approval over the CNET review? What about Google? IBM?

We need to be sure this review has received proper journalistic review by all CBS partners.
Score: 4 Votes (Like | Disagree)

I'm going in with low expectations so that I may be pleasantly surprised.


If I were going to see this thing, I would go in with low expectations, and expect them to be met.;)
Score: 4 Votes (Like | Disagree)

stukick
Just because he may look like Jobs, doesn't mean he can "pull off" being Jobs.
Score: 4 Votes (Like | Disagree)
Read All Comments