Roundup of Analyst Expectations Ahead of Q1 2013 Earnings Call

Philip Elmer-Dewitt has assembled his quarterly list of analyst predictions ahead of Apple's earnings report this afternoon. The list includes estimates from 67 analysts: 28 "independent" and 39 "institutional" who work for large investment houses or research organizations. 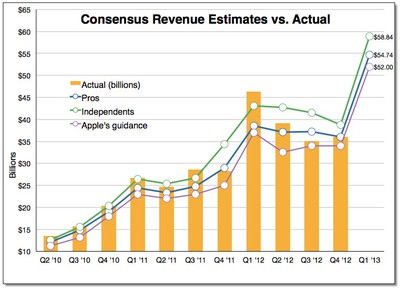 As usual, the independents are much more bullish than the institutional analysts. The independent consensus expects earnings per share (EPS) of $15.11 on revenue of $58.84 billion. The institutional consensus is EPS of $13.45 on $54.74 billion in revenue. Across all analysts, the median expectation is for earnings of $14.20 on $55.96 billion in revenue, a year-over-year increase of 10% and 30% respectively. 2011's holiday quarter was the strongest in the company's history.

Last quarter the company earned $8.2 billion in profit on revenue of $36 billion. For this quarter, Apple issued guidance of $52 billion in revenue with profits of $11.75 per share. The company has, in the past, exceeded its guidance by a significant margin.

Apple will announce its earnings for the first fiscal quarter of 2013 (fourth calendar quarter of 2012) and host a conference call regarding the release this afternoon at 5:00 PM Eastern / 2:00 PM Pacific. The earnings release itself typically comes in around 4:30 PM Eastern. MacRumors will have live coverage of the proceedings.

Can everyone get their money out? Or if people stop putting more cash in, do you expect them to walk to apple headquarters and collect a piece of the building?


I'm not sure which you don't understand the most, a Ponzi Scheme or how stocks work.
Score: 6 Votes (Like | Disagree)

nick_elt
Looks pretty good to me, but im sure we will here that apple is doomed soon.
Score: 6 Votes (Like | Disagree)

ECUpirate44
Apple is here and must innovate to avoid becoming a dog.
Score: 5 Votes (Like | Disagree)

I am prepared to see the stock tumble like a rock no matter what Apple post because the trend in the market is to find anything negative about Apple and focus on that.

Even if numbers are stellar guidance for next quarter will be low and the market will focus on that and the stock will drop like a rock. If not right away over the next week or so after a possible initial rise on a great (not good) earnings report. If the earning report is on target or under... Then expect a huge massive drop in after hours... either way the momentum of the market is not favorable and Apple will drop.

The only way they can sustain upward momentum right now is an out of the world quarter, and heavenly guidance for next quarter. Without these the market will lose faith... They need to see a new product to get inspired.
Score: 3 Votes (Like | Disagree)

Peace
Hold on to your hats kids. This is going to be a very important earnings report.
Score: 3 Votes (Like | Disagree)

TreRep
Gross margin was 38.6 percent compared to 44.7 percent in the year-ago quarter"

This is what Wall St. is going to pound on, and this is why apple may be switching to less expensive casings for it's iPhones. Margins.
Score: 2 Votes (Like | Disagree)
Read All Comments