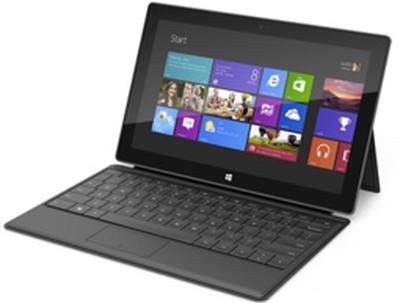 The Surface Pro sports an Intel Core i5 processor with Intel HD Graphics 4000, 4GB of RAM, and a more robust battery. Unlike the RT version of the Surface, it is able to run the full version of Windows 8 as well as Windows 7 applications.

Both versions of the Surface Pro ship with a Surface pen, but the Touch or Type Covers, which retail for $100, are not included.

Anandtech took a preliminary look at the tablet, and created a chart comparing the Surface Pro to the Surface RT and Apple's iPad.

Beginning on February 9, the Surface Pro will be available for purchase on Microsoft’s website, at Microsoft retail outlets, and third party retailers like Staples and Best Buy.

Alongside the Pro, Microsoft is planning to release a 64GB standalone version of the Surface RT for $599, $100 less than the version that ships with the included Touch Cover, and a slew of new Surface accessories.

inlinevolvo
Skip win 8, it's pretty much a usability nightmare.
Score: 69 Votes (Like | Disagree)

Why the comparison with the iPad only ? Surely a fairer comparison would be between the surface pro and the MacBook Air 11" stock.

rnizlek
I'd be interested in knowing the expected battery life. With a Core i5 and a smaller battery than an iPad, it can't be great.
Score: 43 Votes (Like | Disagree)

IJ Reilly
If they keep throwing things against the wall one of them might even stick.
Score: 35 Votes (Like | Disagree)

As a tablet it is heavy and much of the software is not optimized for touch.

As an ultrabook it cannot be comfortably used in your lap and the keyboard and trackpad are not as good as the MacBook Air.

I think the Windows 8 OEM's have better answers for the "convertible tablet/ultrabook" category than Microsoft does.

EDIT: According to Microsoft (http://www.microsoft.com/en-us/news/Press/2013/Jan13/01-22SurfaceFamilyPR.aspx), the Type Cover is NOT included in the $899 price. They refer to it as optional in a caption for a picture, and when listing what is included, they omit it. So the Surface Pro price (with keyboard) is $1028 versus the MacBook Air at $999. If you are in the market for a convertible Windows 8 machine, I would look to one of the Microsoft OEM's that at least gives you an actual full-blown UltraBook that can be used in your lap, but can also serve as a compromised tablet like the Surface Pro. There is no sense on compromising both the laptop and tablet experience in a convertible laptop.
Score: 26 Votes (Like | Disagree)

ronwasserman
They are high.
Score: 24 Votes (Like | Disagree)
Read All Comments