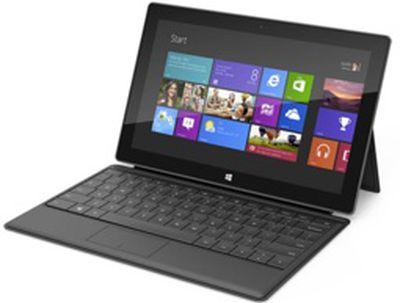 Microsoft announced pricing information on its Surface Pro tablet this morning. The tablet will cost $899 for the 64GB version and $999 for the 128GB version. The Surface Pro comes equipped with an Intel Core i5 processor with Intel HD Graphics 4000, 4GB of RAM, and a display with a resolution of 1920 by 1080.

Instead of running Windows RT like the standard version of the Surface released earlier this month, the Surface Pro tablet will run the full version of Windows 8. The tablet will ship with a Surface pen, but it does not include a Touch or Type Cover, each of which cost another $100. While the official announcement didn’t include information on the Surface Pro’s battery life, the spec list on Microsoft’s website lists a 42 watt-hour battery.

Engadget, however, discovered a tweet from a curious Twitter user revealing that the tablet will have a battery life half as long as the Surface RT. After asking for more information on the battery, the user received a reply directly from Microsoft’s official Twitter account:

The RT version of the Surface officially has an eight hour battery life with some testers finding slightly longer running times, implying that the Surface Pro will feature a battery life of roughly four-and-a-half hours, less than most laptops. This low battery life information comes at a time when Microsoft is seeing poor sales of the Surface RT. A report on Black Friday from Piper Jaffray revealed that the brick and mortar Microsoft stores experienced low Surface sales in comparison to iPad sales at the Apple Store.

A recent report from Digitimes also indicates that Microsoft has reduced its tablet orders and may consider lowering the price of the Surface RT.

The upstream supply chain of Microsoft’s Surface RT has recently seen the tablet’s orders reduced by half, and with other Windows RT-based tablet orders also seeing weak performance, sources from the upstream supply chain believe the new operating system may not perform as well as expected in the market. Microsoft originally expected to ship four million Surface RT devices by the end of 2012, but has recently reduced the orders by half to only two million units. The sources also noted that Microsoft may consider reducing its Surface Pro price to attract more consumers; however, such a decision may put the already awkward relationship between the software giant and notebook vendors in an even worse situation.

The Surface RT is currently available from Microsoft for $499 for the entry level 32GB tablet. There was no specific release date mentioned for the Surface Pro, but it is expected to be released in January 2013.

uaecasher
another fail for Microsoft, they're increasingly becoming irrelevant to Apple, real competitor is Android
Score: 30 Votes (Like | Disagree)

marksman
Microsoft Surface: The Tablet for people who have never heard of an iPad.
Score: 24 Votes (Like | Disagree)

It's not just a tablet.

It's a full blown Windows machine
Score: 23 Votes (Like | Disagree)

Captain B
Comparing it to the iPad makes it look bad as a tablet; at a thousand bucks you compare it to a MacBook Air. And it looks dreadful.