Apple today added the new 13-inch Retina MacBook Pro to the refurbished section of its online store, giving prospective customers the opportunity to save 15% compared to brand-new machine. Currently available models include: 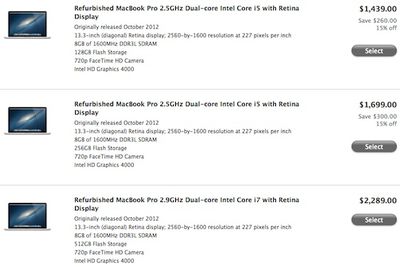 All three models are listed as shipping in 1-3 business days.

As with all of Apple's refurbished products, the 13-inch Retina MacBook Pro units have been thoroughly tested and reconditioned and carry a one-year warranty equal to that offered on brand-new machines.

dlimes13
$1439 sounds like a good price for a NEW one... Should have been around that price to begin with.
Score: 20 Votes (Like | Disagree)

Again, all your spin is worthless in light of the 15" rMBP's pricing. That's what people are basing themselves on when they claim the 13" rMBP should be 1499$. Because by all logic that went into pricing the 15", it should be 1499$. Anything else you come up with is pro-Apple spin, and frankly, should be left as a job for Apple employees, not consumers (consumers should never try to justify higher prices).


I'm an Apple consumer, but I'm also an Apple owner. As the former, I want to pay as little as possible. As the latter, I want others to pay as much as possible. The only "logic" that should go into pricing for any business is what is best for long-term profitability. Sure, I'd have rather personally pay $200 less, but I understand why Apple priced it the way they did (because they can). I'm not saying I'm happy about it as a consumer. If you don't think it's worth $1699, then don't buy it.
Score: 9 Votes (Like | Disagree)

MMOTotal
I'm holding out until the updates, if Apple do discontinue the classic MacBook Pro line I would assume the price on the retina models would decrease.
Score: 9 Votes (Like | Disagree)

The Samurai
*continues to wait for 13" rMBA*

The padding occurs accross the whole range, equally. Yes, it's greedy that there's such a premium for a 32 GB iPhone vs a 16 GB one when the only change is 10$ worth of Flash, but it's consistent accross the whole line-up. I'm not upset about the display, just find it ludicrous that it's a 0$ option on the 15" and a 200$ option the 13" basically.

Yes. That was the right measure for me. Of course, there's no measure to make the 13" cMBP to 13" rMBP fair. None. You need to enter "market will bear-Apple PR land" to make it work, which should be left to people paid by Apple, not its users.

Sure there is. Is it worth it to me, the customer making the decision, to pay $200 more for the rMBP in order to get a machine that's nearly a pound lighter and has a better display? If yes, then it's a "fair" price to me. If not, then it isn't. Since I'm not in the market for a 15" notebook, Apple's relative pricing on the 15" models is irrelevant.

Look, KPOM is right. I find the price of the 13 rMBP too expensive to buy. Much as I would like one. And the price of the 15 inch version is irrelevant as it is a different product. Its only relevance is when you the buyer might decide to choose it instead as its mix of features and price is more appealing to you when you push the purchase button.

But just because I can't afford a 13 rMBP does that mean it is not a fair price? Not to me. But more generally, no. Because Apple is probably selling them as fast as they can make them. A sign that they are too expensive would be if they started piling up in warehouses unsold. That would be a sign that Apple has set the price too high.

If Apple didn't charge as high a price as it could for any of its products, it is not being fair to its shareholders. And there are many shareholders, while you, KnightWrx, are a constituency of one. Apple is not a charity.

In a non market economy, an entity (ruler, politburo, SMA, guild etc) determines the price of a product. All products end up looking the same, quality nosedives, and nobody could be arsed being innovative as it takes forever to get the design and price approved. They all copy the approved design. And the buyers end up in queues and waiting lists to buy crap at approved and mandated prices.
Score: 5 Votes (Like | Disagree)
Read All Comments