With Apple's change to the Lightning dock connector for the iPhone 5 and its other mobile devices, customers have been struggling to find dock solutions compatible with the new standard. Users started with several workarounds and do-it-yourself mods, but gradually unofficial docks and some more official workarounds have appeared to meet customer demand.

One new entrant with some unique features is the OCDock, a Kickstarter project focused on a clean design compatible specifically with the iMac and the Apple Thunderbolt Display. The OCDock's features include:

- A Lightning connector officially licensed under Apple's MFi program, paired with a custom paper-thin cable that allows it to be run underneath the foot of the iMac or display, essentially hiding it from view entirely.

- Strong, residue-free adhesive to mount the OCDock to the foot of the iMac or display, allowing for easy one-handed undocking. One of the Elevation Dock's main selling points under the previous 30-pin standard was a custom low-friction connector that allowed for easy one-handed undocking, but that advantage has been lost with the move to the standard tight-fitting Lightning connector. OCDock solves the problem by using the weight of the iMac or display and a strong adhesive to allow for easy device removal.

- Multiple silicone spacer options for rear support of both naked and cased iPhones, as well as a spring-loaded plate in the bottom of the dock to help provide stability for devices in a broad array of cases.


We chatted a bit with Rait Ojasaar, co-founder of OCDesk, the company behind OCDock, who noted that unlike many crowd-funded Kickstarter projects that have considerable work left to do once the funding goal has been reached, the OCDock is essentially ready for mass production. The OCDesk team has bankrolled the product development and prototyping phases entirely on its own, and simply needs Kickstarter backing to be able to place a large enough order with its manufacturing partners to keep the dock affordable. As a result, OCDesk is currently estimating that the products will launch next month, just weeks after the close of funding later this week, and the team is confident with that stated timeframe.

We were especially interested in hearing more about OCDock's participation in the MFi program, given how slow the rollout of official third-party Lightning accessories has been, but unfortunately much of the information is covered by a non-disclosure agreement. Ojasaar did note that there are several approved MFi vendors to work with who can provide Lightning connectors, but that it still involved a considerable amount of work to build relationships, negotiate a deal beneficial to both sides, and deal with the bureaucracy of Apple's stringent licensing requirements. 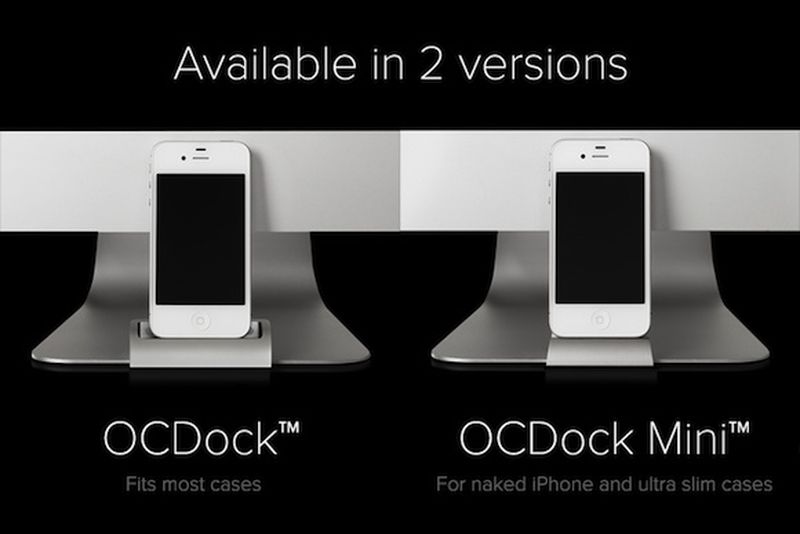 The OCDock has already met its Kickstarter goal, nearly doubling the original $49,000 target, meaning that the project is ready to go once funding closes and the team knows how many orders it has. There are currently two versions of the OCDock available: the full-size OCDock intended for a wide variety of iPhone cases, and the OCDock Mini intended for naked iPhones and those in ultra slim cases. Each model is also available in both 30-pin and Lightning connector varieties, as well as silver and jet black color options.

jasonefmonk
I think the name OCDock is kind of gross. Having the cable (flat as it is) running underneath the iMac stand is something I would never do. Putting the dock front and centre with the iMac is weird too.
Rating: 5 Votes

Having my phone right infront of the screen would be very distracting. I like the design and think if could be more universally positioned, would appeal to more users.
Rating: 2 Votes

baryon
But then you can't neatly put the keyboard on the foot! I feel like this dock is in quite an awkward place, right in front of the screen And I'm not a fan of any kind of adhesive
Rating: 2 Votes

Samuurai
That is an affront to design and would be a blight on any desk. Ugly ugly ugly.
Rating: 1 Votes

WhoDaKat
I can't believe this thing is getting panned in the comments. I'm not a big "dock" guy but I saw this when it opened on kickstarter and thought it was a good idea. Minimal market as it is really only going to sell to iMac owners but nonetheless I thought it was cool.

Hold your phone where the dock supposedly holds it, are you really distracted by it? I kind of like it front and center so I can see calls and things coming in without having to look over or pick up my phone. That seems almost lazy, but I work from home and I like being able to see who calls without averting my gaze from my work. It doesn't block the screen at all. Its also in a good spot for Facetime.

And personally, I love the OCDesk name. lol Since I am OCD, it fits right in.
Rating: 1 Votes
[ Read All Comments ]