Soon after the launch of the 15-inch Retina MacBook Pro in June, we pointed to an analysis by AnandTech showing how the need to drive a massive number of pixels taxed the graphics capabilities of the machine to the point where it struggled to hit 20 frames per second while scrolling on resource-intensive web pages such as Facebook news feeds.

AnandTech now follows up with a new report based on a thread in our forums showing that the latest builds of WebKit, the open source browser engine upon which Safari is based, demonstrate dramatically improved frame rates during scrolling.

I grabbed a build (r135516 - it's no longer the latest build but I assume the later builds also contain the fix) and tried it out on the 13-inch rMBP. Scrolling down my Facebook news feed ended up being one of the best showcases for poor scrolling performance on the rMBPs, so that's obviously the first test I ran. As always I used Quartz Debug to measure UI frame rate.

The results show frame rates of around 20 frames per second (fps) under the standard Safari 6.0.2, but jump to nearly 50 fps when using nightly build r135516 of WebKit. 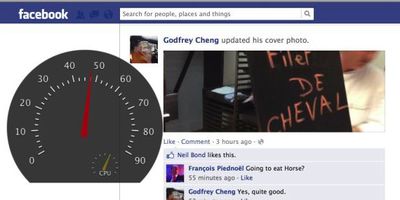 Frame rates approaching 50 fps when scrolling in WebKit nightly build r135515
AnandTech hasn't been able to determine exactly what code changes were made to enable the significant boost to scrolling performance on Retina MacBook Pro models, and it is unclear exactly when those changes will be incorporated into Safari itself, but it certainly seems that a solution is on its way.
Related Forum: MacBook Pro
[ 87 comments ]

Justin941
Blur out the names or someone's getting pizzas sent to thier house
Score: 9 Votes (Like | Disagree)

So why did Apple release a product that clearly wasn't ready yet?

When is anything every ready in this industry?

Everything is in constant motion.
Score: 7 Votes (Like | Disagree)

Apple didn't do anything, webkit did which is mostly people from KHTML which is what webkit was forked from.


That was ages ago. Today's webkit is a much larger beast than that old KHTML. Go ask Dave Hyatt how much work he's put into Webkit as an Apple employee.

To say Apple hasn't make a significant investment in Webkit is to be either ignorant or foolish or both.
Score: 4 Votes (Like | Disagree)

It's a shame so many "trusted" review sites (including The Verge) dinged the rMBP and blamed the hardware.... for what is clearly a software problem.
Score: 4 Votes (Like | Disagree)

ironsienna
Great, that was the major concern I had that was holding me from purchase a new macbook pro: Poor web browsing performance. Kudos to Apple, for working on optimising the code rather than trying to sell another model with faster processor in just a few months. I am so glad they managed to address this as it was rather irritating...
Score: 4 Votes (Like | Disagree)

And what I've been saying all along is quite correct, the problem is not the pixel pushing ability of the GPU. Pixel fill rates, look them up. Again, if you can't understand that a 4 year old GPU, the 9400m, could power a 30" ACD and that we're now in 2012, 4 years later, with GPUs 3 generations newer, I don't know how to explain it to you.

Anyway, I own a rMBP 15" and I've hardly met any "lag" whatsoever. I guess some people are just too sensitive. Thank god Apple knows it's a software issue and is fixing it for those people.

It's not a bs argument, it's not powerful enough indeed. The ui still lags and stutters. The current hardware is just not capable enough. It's an air cpu circa rev. 1. Apple have hacked their way to resolution independence with rendering twice the resolution canvas so as to avoid what win 8 did and go into detail about interface elements. They thus offloaded all the complexity on the hardware, and the hardware isn't there yet. Simple as that. Rev. 1 retina macbook pros are a major compromise. I am still planning to go ahead and buy one, fyi, but If I do I ll be do it in fully aware that I am buying a problematic rev. 1 product, not only for the image retention issue with the lg screen, but also for the gfx barely making it there.


The hardware is capable. You just don't understand GPU hardware or HiDPI to make such claims. Anand has always been full of it.
Score: 3 Votes (Like | Disagree)
Read All Comments

Monday January 30, 2023 3:43 pm PST by Juli Clover
Apple violated United States labor laws when it sent out an email warning employees about leaking confidential information about the company, the National Labor Relations Board (NLRB) said today in a ruling shared by Bloomberg. Rules that Apple has established around leaks "tend to interfere with, restrain or coerce employees" from the exercise of their rights under the National Labor...
Read Full Article • 177 comments