iFixit has released a comprehensive teardown of Apple’s new 21.5" iMac.

The new iMac, with its ultra slim bezel proved to be a disappointment to the iFixit team, because both the glass and the LCD are glued to the iMac frame with strong adhesive, which negatively impacts repairability.

The late 2012 iMac 21.5" – code-named EMC 2544 – is an exercise in disappointment for us. We were quite worried when we saw that super-thin bezel during Apple’s keynote, and unfortunately we were correct: the glass and LCD are now glued to the iMac’s frame with incredibly strong adhesive. Gone are the lovely magnets that held the glass in place in iMacs of yesteryear.

While the RAM, hard drive, and CPU can be replaced, the entire logic board must be removed to do so, which led the iFixit team to give the 21" iMac a repairability score of 3 out of 10, down from 7 out of 10 for last year’s model. 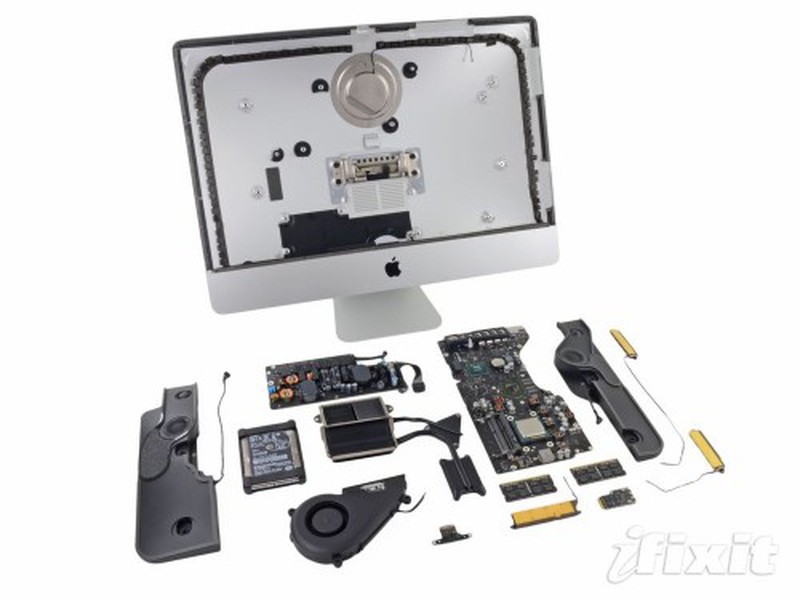 Here are the highlights of the teardown:

-Nothing about the internals of the new Mac resemble last year’s model.
-Apple has swapped out the 3.5“ desktop hard drive for a 2.5” HGST laptop hard drive, freeing up valuable space.
-The hard drive has a rubbery housing at its edges, which is a new design meant to dampen the vibrations from the hard drive in the closely packed quarters of the iMac.
-There are no longer multiple small fans. Instead, Apple is using a single centralized fan.
-Apple’s new iMac has two microphones to improve sound quality when using FaceTime.
-The AirPort card uses a Broadcom BCM4331 single-chip WLAN solution and three Wi-Fi antennas.

iFixit’s teardown also included a detailed listing of all of the chips on the logic board.

Despite the repairability concerns, early reviews for the design of the new iMac were largely positive.

brock2621
Here's the deal, iFixit MAKES MONEY from repairing machines and trying to convince users they too can repair crap if they purchase their tools. So their "3 out of 10" is basically just their profit margins going down. Of course they are going to be "disappointed..."

In short, it's cool to see how they are put together, but iFixit's "ratings" are dumb when done on devices like this, Apple or not.
Score: 78 Votes (Like | Disagree)

is this a good or bad thing?


a lot of people are about to complain saying that the new iMac isn't repairable. these same people would have never replaced an LCD in their iMac anyway.
Score: 76 Votes (Like | Disagree)

Here's the deal, iFixit MAKES MONEY from repairing machines and trying to convince users they too can repair crap if they purchase their tools. So their "3 out of 10" is basically just their profit margins going down. Of course they are going to be "disappointed..."

In short, it's cool to see how they are put together, but iFixit's "ratings" are dumb when done on devices like this, Apple or not.

That's complete crap
Never before has the iMac been totally non user serviceable, no ram upgrade at the very least, not to mention when the hdd fails
All in one =/= non user serviceable
Apple just took the cheap way out and used adhesive tape to stick it together rather than designing an alternative system
Score: 74 Votes (Like | Disagree)

Here's the deal, iFixit MAKES MONEY from repairing machines and trying to convince users they too can repair crap if they purchase their tools. So their "3 out of 10" is basically just their profit margins going down. Of course they are going to be "disappointed..."

In short, it's cool to see how they are put together, but iFixit's "ratings" are dumb when done on devices like this, Apple or not.

One of the most important things with computers is upgradability. Why spend $2000 for a computer only for it to no longer have the minimum requirements needed 3-5 years from now, and then shell out another $2000. It's a waste of money, and resources (so much for environmental sustainability). You are the type of customer that will just shell out money without looking into cheaper alternatives such as upgradings part on a slightly older but still perfectly useable computer.

In any case, does this concern iFixit's profit line? Yes, of course, they are a business. But you make it sound as though that they are a self-serving business that provide absolutely no positive service for consumer, when that is not the case at all. Their repair guides are extremely useful (which are free and publicly available) and have helped me more than a dozen times in repairing and upgrading my various computers over the years. Oh, and for the record, what does Apple provide for self-servicing your Apple device? Nothing, nada. Apple's technician guides are not publicly distributed (unless you know how to find it online) and the funny thing is there is nothing that is rocket science in those books. Let's just say that if you can build Legos, you can upgrade a computer easily.

And when your warranty runs out and your trackpad breaks down? Should you really have Apple charge you $200 for the repair, when you can do it yourself for $30 by finding the part on eBay and using a little common sense?

If there is any company that is only concerning their own profit-margins without any net benefit to the user, it's Apple. It only benefits them by making Apple computers not upgradable because then it coerces the consumer to buy a new computer. All for what? A microscopic .000001" reduction in thickness that you can't even notice?

Look at the Macbook Pro Retina, which is the worst computer in terms of upgradability. Once the battery craps out (which Applecare won't cover), you have to spend $200 to get it upgraded, and if you did it yourself it would cost $500. Before that model, even the Macbook Pros were considered "unupgradable" but in reality, all you had to do was remove the lid, and simply unplug the old battery with a new one (which goes for $50 brand new on eBay versus from Apple which charges $130!).

tl;dr - Don't blame iFixit, they're providing a valuable service to consumers that Apple, selfishly and deliberately, is hindering. If Apple makes their future Macbook Pros unupgradable (i.e. RAM, Hard Drive, and most importantly the battery), then I will choose not to buy another Macbook and go back to Windows (which I haven't done in 8 years now).
Score: 56 Votes (Like | Disagree)

RoastingPig
i wish there was no glue and only just magnets
Score: 42 Votes (Like | Disagree)

Lone Deranger
Yep. Definitely a laptop on a stick. :(
Score: 25 Votes (Like | Disagree)
Read All Comments