New iMac Deliveries to Be Delayed Until Early Next Year?

Apple may not begin shipping the new iMac until early 2013, according to the French site MacBidouille [Google Translate]. When the new lighter, thinner iMac was introduced three weeks ago, Apple said the 21.5" model would ship by the end of November, with the 27" model shipping by year-end. 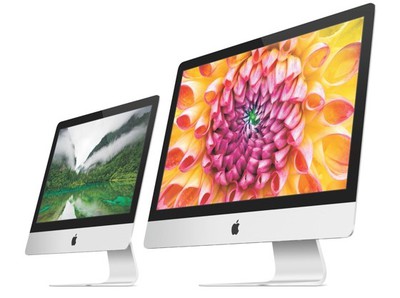 The new iMac uses some advanced welding techniques as well as a new manufacturing process for the LCD screen that was rumored to delay the introduction of the iMac. Apple has run into difficulties ramping up production on its more recent product launches as the company pushes the envelope on what is physically possible.

During Apple's most recent earnings call, Tim Cook talked briefly about the constraints the company faces during the all-important holiday quarter:

In terms of general shortages on the iMac, we’ll be constrained for the full quarter in a significant way, part of that is that we’re beginning shipping the 21.5-inch iMac in November and the 27-inch in December. And so there will be a short amount of time during the quarter to manufacture and ramp those and I expect the demand to be robust. So we will have a significant shortage there.

realeric
I don't understand why desktop Macs should be thinner? :confused:
Score: 129 Votes (Like | Disagree)

hbt15
So it's going to be 6 months out of spec before it even hits shelves.

I don't understand why desktop Macs should be thinner? :confused:


Because thinner is better!

I still chuckle at how careful the photos of the new iMac are to avoid that it's only thin at the edge. There's a ugly bulge on the back that kind of makes the idea that this is a thin computer silly.

If they really wanted the display to be thin, then put the computer into the stand and just let the thin screen float in air. Like the old swing arm lamp iMac. :)
Score: 54 Votes (Like | Disagree)

jashic
well, maybe they should put the older imacs back in the store. It's a better design anyways. Never understood why you need a superthin imac. In reality, isn't even that thin. It's just thin at the edges. In the middle, it has a huge bulge like its pregnant. It's thin if you place it on your desk and stare at it at exactly a 78 degree angle.

What a complete disaster.

Apple maps that can't map properly, Siri that makes mistakes 50% of the time, iPhone 5 that has limited production, iPad mini that has lower resolution than SMALLER Android tablets, An iMac that's kinda "fake" thin and an iMac that isn't available before the holidays....and of course a Mac Pro lineup that's slower than a Mac mini. Oh, don't forget iOS 6 that basically providing nothing new. We all should re-install iLife 2011 as we enter into 2013. Maybe that'll make us feel better.
Score: 52 Votes (Like | Disagree)

If this is the case then I think Tim Cook should be fired.


Yes let's fire him and hire you as the next CEO of Apple.
Score: 41 Votes (Like | Disagree)

If this is the case then I think Tim Cook should be fired.
Score: 34 Votes (Like | Disagree)
Read All Comments