Today, Apple released a major update to Final Cut Pro X that was promised back in April. The initial launch of Final Cut Pro X was met with significant criticism due to a lack of many features found in earlier versions of the software. Apple responded to the concerns with promises of updates. 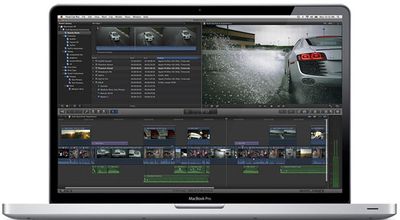 In April, Apple even revealed many features that could be expected in Final Cut Pro X in 2012. These included Multichannel Audio Editing Tools, Dual Viewers, MXF Plug-in Support and RED camera support.

That version update was released today and includes a number of long awaited features:

• Expand multichannel audio files directly in the timeline for precise editing of individual audio channels
• Unified import window for transferring media from both file-based cameras and folders of files
• Redesigned Share interface for exporting projects and range selections to one or more destinations
• RED camera support with native REDCODE RAW editing and optional background transcode to Apple ProRes
• MXF plug-in support that allows you to work natively with MXF files from import through delivery using third-party plug-ins
• Dual viewers, each with a video scope display, let you compare shots to match action and color
• Option to add chapter markers in the timeline for export to video files, DVD, and Blu-ray disc
• Range selection now preserves start and end points in the Event Browser and allows you to create multiple range selections on a single clip
• Paste attributes window lets you choose specific effects to copy between clips
• Flexible Clip Connections allow you to keep Connected Clips in place when slipping, sliding or moving clips in the Primary Storyline
• Add a freeze frame to your timeline with a single keystroke
• Drop shadow effect with intuitive onscreen controls to adjust position, edge falloff, angle, and more
• New controls for combining audio from multiple angles within a Multicam Clip
• Compound Clip creation in the timeline now saves the clip in the Event Browser for re-use in other projects
• XML 1.2 featuring metadata import and export for richer integration with third-party apps

Bensalama21
Final Cut Pro X from October 2011 is a whole different program from the Final Cut Pro X of today. (In a good way)
Score: 25 Votes (Like | Disagree)

turtlez
aw now all the FCP haters have to switch back again XD
Score: 25 Votes (Like | Disagree)

KdParker
This ought to get the mac pro refresh conversation going now....
Score: 16 Votes (Like | Disagree)


I can't agree more, but somehow, some way, people will still complain :(
Score: 14 Votes (Like | Disagree)

tinmancactus
As much as it is great news that these features have finally been implemented the fact still remains that Apple have practically given away their film editing market to Avid and Adobe.

I always used to use Adobe Premiere, switched to the Avid when I began studying film full time and I tried out Final Cut Pro X for use at home. I figured the reports of it being "iMovie Pro" were exaggerations but they really aren't.

I do hope Apple don't do any more culling of their pro products. I'd hate for future online edits, colour grades, etc. to be done on Windows...
Score: 13 Votes (Like | Disagree)

This ought to get the mac pro refresh conversation going now....

Apple never once uses the Mac Pro to show off their most hardware intensive application. Sure, you might say who cares. But that is the closest thing they have to a professional application and they show it off on laptops. Face it, Apple doesn't care about the professional market. They are waiting to update the Mac Pro in 2013. That means a 3 year gap between updates. No company who actually cares about a specific type of customer will refuse them new products, new CPUs, or new GPUs for that long because if they do, those customers will switch to another platform. Time is money, and people can't just wait forever for a faster Mac Pro when they need to get work done. They just go to someone else that will provide the power they need. And not to mention the 2013 Mac Pro update could totally suck. It could just be a slight bump to bring on current I/O options as well as a minor spec bump. The Mac Pro doesn't even come with proper GPUs. No professional GPU is standard. The base GPU is a 5770, a low end gaming card, and a 5870, a mid range gaming card. The Evergreen GPU family, 5870 and 5770, are now over 3 years old and Apple has not even touched them. That's pathetic. And if we are waiting til 2013 for a Mac Pro update, that means the GPUs will be nearing 4 years old. And Apple could easily update just the GPUs and have pro customers buy them by themselves. But they don't. If Apple really wanted to cater to the professionals, they would have Quadros or Firepros standard, not gaming cards. Tell me one other company that sells workstations with gaming cards as the only options when you customize it online. Sure, you can buy a Quadro 4000, which is over 2 years old and inferior drivers compared to running one in Windows. And you can't even add one when building a Mac Pro. You have to first pay for a gaming card then you can buy a professional GPU. If Apple offered the upcoming Quadro K2000, K4000, and K5000 as the only GPU options for the 2013 Mac Pro, then maybe I would think that Apple still cares about professionals. But there is no evidence that makes me think they do.

Rant over.
Score: 12 Votes (Like | Disagree)
Read All Comments