AppleInsider has posted a list of 24 different model numbers said to be for Apple's "iPad mini" scheduled for introduction at a media event next Tuesday. 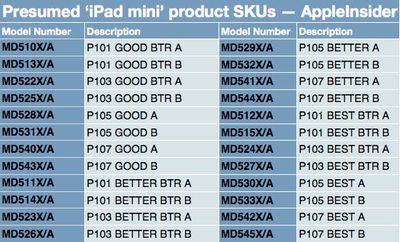 According to the list, the iPad will be available in four basic device variants that presumably correspond to different capacities: P101, P103, P105, and P107. The set of four variants suggests that Apple may be releasing the iPad mini with capacities ranging from 8 GB up to 64 GB.

Each of those four variants is available in three different flavors designated "GOOD", "BETTER", and "BEST" that are presumed to be related to connectivity options. Apple appears set to launch both Wi-Fi and cellular-capable models, with the three flavors suggesting that there may be multiple cellular-capable versions such as separate 3G and 4G LTE models. Alternatively, there may simply be two different LTE-capable versions in order to support the various carrier networks available around the world, although it is unclear why one such model would be designated "BETTER" and another "BEST".

Finally, each model and variant is available in "A" and "B" versions, which almost certainly refer to color options. Current iPad models are available with black and white front panels, but rumors and part leaks have suggested that Apple may be extending those color differences to the aluminum rear shell with anodization as on the iPhone 5.

Update 7:36 AM: An alternate theory on the various models suggests that the "Good, Better, Best" designations refer to three different capacities, which would be more in line with Apple's previous use of the terms. In this scenario, the P101/P103/P105/P107 would refer to four separate hardware models, which could include Wi-Fi only models and perhaps several different cellular-capable models. The A/B designations would continue to refer to two color options.

Update 7:59 AM: 9to5Mac has independently received the part numbers and believes that some of them refer to the rumored tweaked full-size iPad with Lightning connector.

In this scenario, 12 of the new model numbers represent the iPad mini in a combination of three capacities, two colors, and two connectivity variants (Wi-Fi and cellular). The remaining 12 model numbers would represent the tweaked full-size iPad with a similar matrix of configurations. In the United States where Apple sells both GSM and CDMA cellular models, the full product matrix could include 36 different iPads: 18 iPad mini models and 18 tweaked full-size iPad models.

who wouldnt want the best?

If Steve Jobs was still with us,
These would have been coded

BuffyzDead
If Steve Jobs was still with us,
These would have been coded

JGowan
I'm gonna be getting one of Best models for my wife for Christmas/Anniversary. Gonna be great! She always complains of our iPad's weight! Glad to see that Apple is addressing the smaller tablet arena with lots of models. We call that "throwing down" where I come from!
Score: 8 Votes (Like | Disagree)

I reckon that the variation will be with colours, in line with the new iPod touches, with good, better, best being 3 storage sizes.

Three stages of connectivity doesn't sound likely to me.
Score: 6 Votes (Like | Disagree)

basesloaded190
With the Surface coming out soon, you can bet that Apple is going to send out invitations for their event to rain a little on Microsoft's parade.
Score: 5 Votes (Like | Disagree)
Read All Comments