As noted by iPhoneinCanada.ca, Google today added its Street View functionality to the web-based version of its Google Maps product available to iOS and other mobile device users. With Apple's transition to its own Maps app in iOS 6, users still wishing to use Google Maps have been able to do so through the maps.google.com web app, but the web version has been missing some features compared to the native iOS app that was previously available on Apple's devices.

Our own tests with Google Street View via the Google Maps web app were very straightforward. Just load up the maps.google.com web app in mobile Safari, tap on a location and a new bottom bar emerges with an icon of a person. Tap that and voila–you have Street View, which opens up in a new tab displaying the URL maps.gstatic.com. 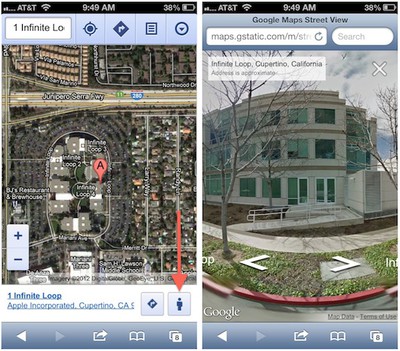 Access to the feature appears to require that users allow the web-based Google Maps app to access their locations.

Google is reportedly working on its own native iOS maps app for submission to the App Store, but that app is not expected to be ready for several more months. In the meantime, Google appears to be beefing up its web-based maps to help bridge the gap while also enhancing functionality for other mobile devices.

Another useless app that chews lots of data and requires a data connection to work.

You do know that Apple Maps requires a data connection too, as well as kills your battery when you use it. Or are you bashing that as well?
Score: 19 Votes (Like | Disagree)


that's because safari is snappier
Score: 14 Votes (Like | Disagree)

Actually, you are wrong. Apple Maps does not need data. The map is self contained in the app, it just needs a GPS signal.


This is not true. It will only show cached data. You still need a data connection to zoom into places you have not viewed before yet.
Score: 11 Votes (Like | Disagree)

Actually, you are wrong. Apple Maps does not need data. The map is self contained in the app, it just needs a GPS signal.

mikefla
Another useless app that chews lots of data and requires a data connection to work.

Monday May 10, 2021 8:11 am PDT by Joe Rossignol
Apple recently released a redesigned Siri Remote with a physical clickpad, but if you have an original Siri Remote laying around that you still plan on using, you may be interested in getting an AirTag case for the remote. Etsy user PrintSpiredDesigns has capitalized on the opportunity with a new 3D printed, made-to-order AirTag case for the original Siri Remote. The remote slides into the...
Read Full Article • 83 comments

Monday May 10, 2021 10:41 am PDT by Juli Clover
Apple's upcoming iPhone 13 models will be slightly thicker than the iPhone 12 models and will also feature larger, thicker camera bumps with lenses that protrude less, according to iPhone 13 schematics seen by MacRumors. The new iPhone 13 and 13 Pro models are expected to feature a thickness of 7.57mm, up from 7.4mm in the iPhone 12 models. That's an increase of 0.17mm, which won't be hugely ...
Read Full Article • 180 comments