Amid varied reports claiming that Google has been working on a replacement standalone Maps app for iOS to replace the bundled app included with every version of iOS until last week's release of iOS 6, The New York Times weighs in with its own sources claiming that Google is indeed working on a standalone app for iPhone and iPad and is hoping to have it available in "another couple months or so".

As was noted yesterday by The Verge, Apple and Google still have over a year left on their contract for Google to provide Maps for iOS, and thus Google was caught off guard when Apple announced in June that it would be replacing Google's solution with its own Maps app for iOS 6. As a result, Google still needs several more months to complete work on a standalone offering to be submitted to Apple for inclusion in the App Store. 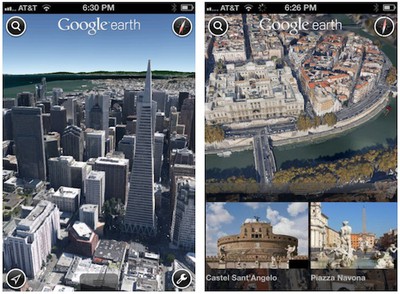 The New York Times notes that another challenge faced by Google stems from its desire to build 3D imagery into its upcoming Maps app for iOS 6. The functionality was added to the Google Earth app several months ago, but moving it to the more traditional mapping app will require additional work.

Another complication, according to a person with knowledge of Google Maps: Google would likely prefer to release a maps app that includes 3-D imagery so it is comparable to Apple’s. But Google has 3-D images in Google Earth, which is a separate app with a separate code base from Google Maps, so it would take some time to combine the two.

Apple's new Maps app has come under significant criticism for a number of issues, including incomplete or poor imagery, errors in locating points of interest and even cities, and a lack of transit information. As with Google Maps, users can report problems to Apple to help improve the product.

ipedro
By then, a lot of Apple's maps glitches will have been resolved.

The first couple of months will see a significant improvement in maps as millions of users calibrate data by simply using maps. If thousands of people travel on a road that is slightly off in maps, that road will be adjusted. If businesses find that their store pin is off, they'll Report a Problem and drop a pin in front of their door.

There will be a big bump in improvements in the first couple of months, then a gradual improvement as Apple tackles glitches and obvious problems over the year and then another big bump with the release of Maps 2.0 in iOS7 when Apple improves the codebase and adjusts/adds features.

Ripping off the bandaid is only going to hurt for a quick moment but Apple will gain control of their maps and we'll see steady improvements over the long term. It'll be worth it.

Big opportunity missed by Google in not having their app ready. Duh, who didn't see this coming??
Score: 26 Votes (Like | Disagree)

Erwin-Br
It will take YEARS for Apple to catch up on Google. Google is years ahead in experience, they have a bigger team dedicated to maps, and lots, lots, lots of data for POI's. Data gathering is their specialty, even. Add to that the poor reputation Apple has launching services (think MobileMe and Ping) and I can't see how this can ever succeed.

I believe Apple will improve their maps, sure, but catch up on Google? I don't think so.
Score: 14 Votes (Like | Disagree)

sclawis300
looks like Apple may have played this one perfectly. Catch Google off guard, fix the problems as fast as you can, then by the time google does come out with something people will be used to Apple's map. BOOM. As long as Apple gets the map together, I don't think anyone will care about google maps. Apple actually gave me a much better route to take yesterday than what google suggested.
Score: 14 Votes (Like | Disagree)

SethBoy
All these months of iOS 6 betas and Google was somehow taken by surprise? :rolleyes:

Edit: Okay, apparently Google has been “surprised” since June.
Score: 13 Votes (Like | Disagree)

All these months of iOS 6 betas and Google was somehow taken by surprise? :rolleyes:

Edit: Okay, apparently Google has been surprised since June.


It was public knowledge that Apple had purchased Mapping companies over the past several years. If Google didn't know this could be coming and were not already working on a standalone map app for iOS they haven't been paying attention.
Score: 12 Votes (Like | Disagree)

spatil
This competition is good for us!!
Score: 11 Votes (Like | Disagree)
Read All Comments