How To Report a Problem With iOS 6 Maps Data

A large amount of criticism has been correctly directed towards Apple regarding the new Maps app in iOS 6, with common complaints focusing on Points of Interest data. This is the information that Apple has purchased from third parties relating to addresses and phone numbers of stores, museums, hospitals and the like.

Google Maps is a much more complete, more polished product offering, but that's mostly because Google Maps has been around for years. Its developers have had plenty of time to refine it -- but its users have helped a considerable amount as well. Every Google Maps page has "report a problem" located somewhere on it, allowing the company to crowdsource and verify much of its data.

Like Google Maps, Apple also allows users to submit error reports and correct POI data. Last week, Apple said that "the more people use [Maps], the better it will get." Reporting errors in information is surely part of how Apple plans to improve the product. 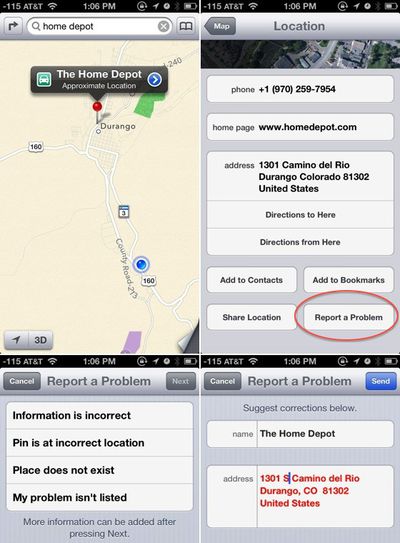 The Home Depot in Durango, Colorado is located at 1301 South Camino del Rio, but, Apple's map data puts it at 1301 Camino del Rio, in the middle of downtown Durango. It's unclear how quickly the data will be integrated into Maps, nor what sort of quality control processes the company has in place to deal with malicious submissions.

However, with Apple aggressively recruiting former Google Maps employees, it seems likely that lessons learned during Google Maps development will soon be implemented at Apple. Incidentally, Google Maps gets the address correct.

keysofanxiety
I know this picture has been going around, and we've probably all seen it, but ...

darkslayer13
there's only one nice thing about apple making its own maps - COMPETITION!

because now google and apple will be competing with maps on mobile devices, this will drive the companies to consistently make better map apps for the consumers.

Why is such a terrible font used on the map as well?

dashiel
In 2010, when Google was suffering similar, though not as widespread problems, they were receiving 10,000 user submitted corrections a day; just over 3.5 million a year. Maps has been in the wild for less than a week.
Score: 18 Votes (Like | Disagree)

Schmitty11
Is there a "The entire app is incorrect" option?
Score: 15 Votes (Like | Disagree)

there's only one nice thing about apple making its own maps - COMPETITION!

because now google and apple will be competing with maps on mobile devices, this will drive the companies to consistently make better map apps for the consumers.


Competition only works when customers are able to switch without friction between different products.

The current situation is about as non-competitive as can possibly be.
Score: 13 Votes (Like | Disagree)
Read All Comments

Thursday September 29, 2022 12:38 pm PDT by Juli Clover
Tony Blevins, Apple's vice president of procurement, is set to depart the company after he made a crude comment about his profession in a recent TikTok video, reports Bloomberg. Blevins was in a video by TikTok creator Daniel Mac, who was doing a series on the jobs of people he spotted with expensive cars. After seeing Blevins in an expensive Mercedes-Benz SLR McLaren, Mac asked Blevins what ...
Read Full Article • 746 comments