Amid major criticism of Apple's new Maps app for iOS 6 that replaces the Google-powered app included on the iPhone since 2007, multiple sources are now reporting that Google already has a separate Maps app for iOS ready to go and in fact already submitted to Apple.

The first report comes by way of The Guardian, which says that Google is indeed preparing its own Maps app for iOS 6.

Google, I hear from roundabout sources, is enjoying the bad press Apple is suffering. It would be surprising if its mappers could resist some schadenfreude, since they are very proud of their work; having it rejected wholesale must be galling.

The same sources say that Google is preparing a Google Maps app for iOS6, which will appear in time. No official statement has been made and there will inevitably be questions over whether Apple will approve it in the App Store. (Apple might not, on the basis that it "competes with existing functionality", but would invite a further backlash if it did.)

The Guardian's report was tweeted by well-connected iOS developer Steve Troughton-Smith, who added a "Yep" to the assertion and framed it as if the app has already been submitted to Apple. 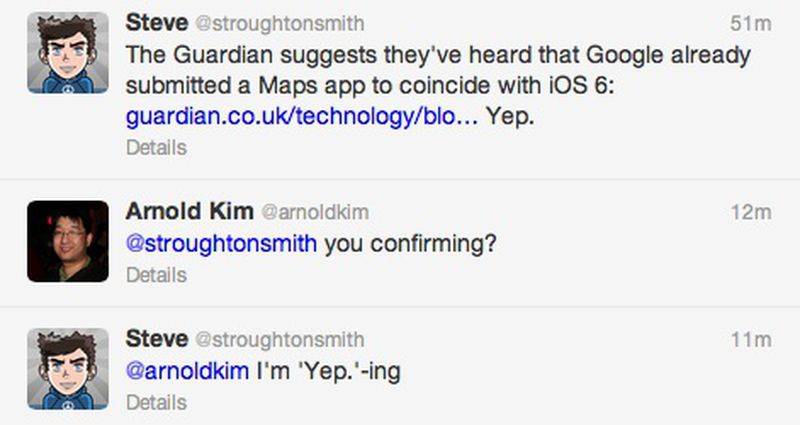 9to5Mac has also weighed in with its own claims that Google has had a standalone version of its Maps app for iOS for a number of years and that an iOS 6-compatible version has indeed been submitted to the App Store.

Finally, TechCrunch is also claiming that a Google app is in the works, with the company aiming to have it available on the App Store "before Christmas". Apple has, however, been known to hold other Google apps in limbo for extended periods of time, so it remains to be seen if and when Google's solution will be available as an alternative to the built-in Maps app from Apple in iOS 6.

Update: The Loop's Jim Dalrymple, who is well sourced at Apple, pours a bit of water on the story that Google has submitted its own Maps app to Apple.

Caliber26
And the congregation said: HALLELU!!!

Eduardo1971
On of the few times Apple fanatics are actually rooting for Google!

chrmjenkins
And now google can control and update the maps app at their own discretion. Better for everyone.
Score: 35 Votes (Like | Disagree)

basesloaded190
Hopefully this will put a fire under Apple's ass to make their maps better.
Score: 16 Votes (Like | Disagree)

FNi
If Apple really keeps Google Maps in approval hell for the next 2/3 months, there will be a very nasty backlash which will mean their entire approval process will be under a very public microscope once again.

I doubt they'll want that.
Score: 9 Votes (Like | Disagree)

syndalis
If it is as good as the new YouTube app from google is, I will probably make this my primary map app until Apple sorts everything out.

I live in a major metro and I don't own a car, so the turn by turn Siri stuff means much less to me than public transit and walking directions do.
Score: 9 Votes (Like | Disagree)
Read All Comments

Monday April 6, 2020 2:56 am PDT by Tim Hardwick
Apple will announce a new 13-inch MacBook Pro in May with the codename J223, according to a rumor shared by YouTuber and leaker Jon Prosser. Note: it’s a refresh to the current 13” So the bigger 14” display upgrade is a big possibility— Jon Prosser (@jon_prosser) April 4, 2020 Analyst Ming-Chi Kuo has said Apple plans to release new MacBook Pro and MacBook Air models with scissor keyboards ...
Read Full Article • 148 comments

Tuesday April 7, 2020 4:28 am PDT by Tim Hardwick
Two images shared on social media this morning are currently stoking speculation about possible hardware redesigns coming to the iPhone 12 and the potential introduction of Home screen widgets in iOS 14. Shared by Twitter user Fudge (choco_bit), the images depict a front and rear graphical representation of a smartphone with interface elements on the screen, suggesting it came out of a...
Read Full Article • 110 comments

Monday April 6, 2020 4:38 am PDT by Tim Hardwick
Further references to Apple's upcoming low-cost iPhone have appeared online, one on a Chinese e-commerce website and another on Verizon's smartphone trade-in page. Spotted by tech blog MySmartPrice, Chinese retailer JD.com has published a placeholder for Apple's so-called "iPhone 9" that includes a teaser image of a veiled smartphone, but other than that it lacks any particularly revealing...
Read Full Article • 102 comments

Tuesday April 7, 2020 10:06 am PDT by Juli Clover
Apple today released iOS and iPadOS 13.4.1, minor updates that come two weeks after the release of iOS and iPadOS 13.4, major updates that introduced iCloud Folder Sharing, a new Mail toolbar, trackpad support for the iPad, and more. The iOS and ‌iPadOS‌ 13.4.1 updates are available on all eligible devices over-the-air in the Settings app. To access the updates, go to Settings > General...
Read Full Article • 70 comments

Tuesday April 7, 2020 7:00 am PDT by Eric Slivka
Rumors of Apple-branded over-ear headphones have been circulating for quite some time, while more recent rumors have mentioned an "AirPods Pro Lite" that could also be in the works, and Twitter leaker Jon Prosser's recent foray into Apple rumors provides a bit more detail on what we might able to expect for these products. Current Beats Studio3 Wireless and BeatsX On the over-ear side,...
Read Full Article • 55 comments