Web Versions of Notes and Reminders Go Live on iCloud.com

Apple has added the web versions of Reminders and Notes to the public iCloud.com website for access from desktop Macs and PCs. These web apps have been live for developers in beta for several months. 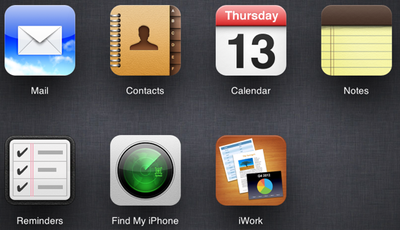 Notes is a fairly faithful reproduction of the skeuomorphic notepad on the iPhone. Users can create, edit, and delete notes, with updates reflecting on iOS devices in near-real time. Reminders works the same way.

The iCloud website has been updated in time for the iPhone preorder launch tomorrow, as well as the release of iOS 6 for all iOS users next Wednesday.

Branskins
I still cannot believe how fast and fluid these web apps are. I usually don't expect this from websites unfortunately :/
Score: 11 Votes (Like | Disagree)

chaosconan
I just don't understand Apple. All the icons are consistent between iPod touch, iPhone, iPad, and iCloud but they decided to revamp the icons on iPod nano. It just does not make logical sense. It just really bugs me not understanding why they did it!!! :mad:
Score: 10 Votes (Like | Disagree)

If you have, let's say, example@me.com, how do you get example@icloud.com?
Score: 6 Votes (Like | Disagree)

Notes is a fairly faithful reproduction of the skeuomorphic notepad on the iPhone.

I managed to make it fifty years without ever having to need the word skeuomorphic. Now I find it in news articles almost everyday. I better start using it or I'll fall out of fashion.

Not bad for a first try.

You should really read this:

Evolutionary computing is now used as an umbrella term to cover more specific variations such as evolutionary programming, genetic algorithms, and genetic programming, as well as others. I have gone through the foregoing critique of skeuomorphs, because it is clear that they play a large role in the way we constitute our practice. We have learning systems based upon neural nets, which to some extent model neurons. We have evolutionary systems based upon genetic algorithms and genetic programming, which to some extent model genetics. We have evolving cultural systems based upon a hybrid of genetics and shared memory. Failing a comprehensive theory explaining why these systems should operate in silicon in the same way as they do in carbon, we have a mixed metaphor, a scrambled skeuomorphic system par excellence.

In the branch of evolutionary computation specifically interested in general problem solving and optimization, it is not clear why we have embraced the precise evolutionary models we currently use. We seem to be of two minds, simultaneously exploring biological processes for ideas and then extending them in non-biological realms. Genetic algorithms have been a successful hybrid of biology and machine. Moreover, they conjure up the cachet of being founded on real biology. David Fogel has repeatedly made the case that the phenotypic algorithms of evolutionary programming may be more effective than genetic algorithms for certain problem classes, even though the former lack the hallmark of biological fidelity [4]. After all, why should biological fidelity be an issue in a non-biological, silicon world? This push and pull between real biology and fanciful experiment is a healthy dynamic, since by challenging the universality of processes taking place in carbon-based life, we explore not only that which is unique about natural life, but concurrently the space of possibilities in artificial life occupied by evolutionary computation. Our agent populations already deviate quite markedly from normative (human) behaviors: they are sexual hermaphrodites. They transcend great distances on fitness landscapes to mate with others of similar accomplishment and to spawn descendants in places neither parent has visited. It is refreshing to see further bendings of the rules, like the comedic seriousness with which Gusz Eiben [5] has experimented with agent "orgiastic" sexual recombination. By this he meant sexual recombination from more than two parents. In humans this will likely be among the first kinds of gene therapy practiced. Diseases inherited from mitochondrial DNA may be obviated by replacing the cytoplasm of the "contaminated" egg with that from another mother or by transplanting the nucleus to a second mother's egg. The result would be three genetic parents: two mothers and one father. The natural world should be mined for ideas and inspirations, but these need to be tested in the artificial worlds in which we work because they offer different constraints and possibilities.
Score: 5 Votes (Like | Disagree)


ESPECIALLY iMessage for all the poor PC users</3

P.S. just as I was typing this, my comma key popped off. not kidding.
Score: 5 Votes (Like | Disagree)
Read All Comments

Sunday June 26, 2022 7:36 am PDT by Joe Rossignol
iPhone 14 Pro models are widely expected to feature always-on displays that allow users to view glanceable information without having to tap to wake the screen. In the latest edition of his Power On newsletter for Bloomberg, Mark Gurman said the feature will include support for iOS 16's new Lock screen widgets for weather, fitness, and more. "Like the Apple Watch, the iPhone 14 Pro will be...
Read Full Article • 136 comments