Fast Company reports on ongoing internal strife at Apple over the company's use of software skeuomorphism, the inclusion of certain ornamental elements in a product that are carried over from previous tools addressing the same task for which the elements were required for functionality. Daring Fireball's John Gruber has linked to the article, noting that he has heard similar word of an "internal political divide" over the issue.

One of the most frequently-cited examples of questionable skeuomorphism in Apple's software is the company's set of calendar apps, which have recently used a stitched leather design reminiscent of physical desktop calendars, complete with the remnants of torn-off pages visible near the binding. Game Center, which is presented as a gaming table complete with wood grain and green felt, is another oft-cited example. 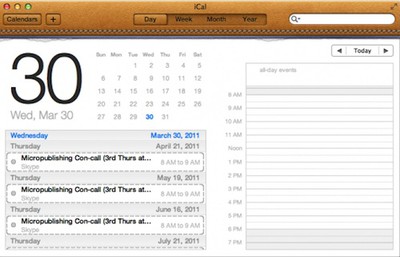 Skeuomorph-heavy design of iCal in OS X Lion
According to the report, Apple's iOS chief Scott Forstall has long been a proponent of incorporating skeuomorphic features in the company's software, with Steve Jobs having supported and even originated that design direction for Apple's products. But others such as hardware guru Jonathan Ive find the inclusion of such features distasteful, and Apple's designers have reportedly been divided into camps over which direction to take Apple's products. Fast Company's interviews with former Apple designers and others in the industry reveal the degree of controversy over the practice:

Says the former senior UI designer at Apple, "I feel like [Apple] has concentrated too much on mimicking the visual skeuomorphic approach rather than concentrating on the actual functionality." For example, in iOS 6, the latest version of Apple’s mobile operating system, Forstall recently demoed an animated paper shredder, which will be used to delete e-tickets and coupons. How many iPhone users have ever actually seen a paper shredder in real life? Is it necessary? Or just visual masturbation? "To me, it’s lipstick on a pig," says the source intimately familiar with Apple’s design process. "There’s no need to add glitter if the product can stand on its own."

The report points to Windows 8 as an example of how companies can bring fresh user interface ideas by minimizing reliance on skeuomorphism to try to replicate experiences that may no longer be optimal or even relevant. A follow-up report will be examining the issue from Microsoft's perspective, with the conclusion of today's report hinting that Microsoft sources have unflattering things to say about Apple's approach.

I am fine with Game Center, but please change the osX versions of iCal and Address Book. I didn't upgrade to lion for this reason, and now that my new Air comes with it I want to vomit every time I see it.


You didn't upgrade to lion because you don't like the ui design of two programs?
Score: 67 Votes (Like | Disagree)

Moonjumper
Skeuomorphic features in iOS are like mock-tudor beams on a Bauhaus building.
Score: 54 Votes (Like | Disagree)
Read All Comments

Monday May 10, 2021 10:41 am PDT by Juli Clover
Apple's upcoming iPhone 13 models will be slightly thicker than the iPhone 12 models and will also feature larger, thicker camera bumps with lenses that protrude less, according to iPhone 13 schematics seen by MacRumors. The new iPhone 13 and 13 Pro models are expected to feature a thickness of 7.57mm, up from 7.4mm in the iPhone 12 models. That's an increase of 0.17mm, which won't be hugely ...
Read Full Article • 201 comments