Late last month, Japanese blog Mac Otakara sparked particular interest in a set of photos of an assembled front panel from the iPhone 5 by claiming that a square feature near the top of the part was likely to be related to near field communications (NFC) capabilities. That interest was quickly tamped down when The Loop reported later in the week that there would be no NFC in the iPhone 5.

Despite the fact that the square feature is slightly off-center with respect to the device, we've assumed that it must be the earpiece speaker, and consultations with experts at RepairLabs have suggested the same. 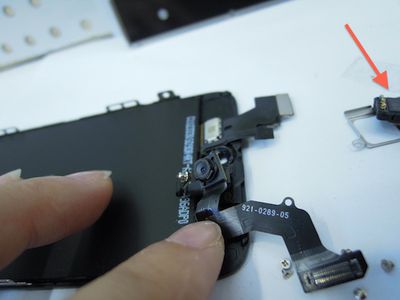 Assembled front panel with earpiece bracket removed – bracket and speaker at right
Sonny Dickson has now posted a new set of photos of the assembled front panel that shed some additional light on the situation. A couple of the photos show the square bracket having been removed, and one photo in particular contains a partial view of what does indeed appear to be an earpiece speaker.

Closeup of front panel with bracket and speaker removed and front camera folded back
Apple is expected to introduce the iPhone 5 at next Wednesday's media event.
[ 151 comments ]

chrmjenkins
This message brought to you by the Fingernail Clippers Association of America
Score: 31 Votes (Like | Disagree)

greytmom
Good grief. People, it is entirely possible that a woman might actually be involved here.

And for the record, I'm a girl, my fingernails are about that long, I never wear nail polish, and one of my nails broke this morning, so while it is filed nicely, it is shorter than the others.

Michaelgtrusa
Well more leaks, I really hoped it would have a wider screen.
Score: 8 Votes (Like | Disagree)

The truth is, as much as NFC is a buzz word among new tech, especially for "geek ware" like the Nexus 2 phone, NFC still has a long way before getting off the ground.

Companies are still fighting over the standard in payment (much the same as the old Mondo vs. Monster vs. Interac vs. Visa vs. Mastercard fight when it came to debit cards) and retailers are wary to get involved with NFC until a standard is met. In fact, many are reluctant to invest money into something a bank will just offer for free in the future anyway.

Without a standard, NFC is simply a nice thing to boast about to technophiles.

I think you are greatly underestimating how useful NFC can be and how widespread it is outside of the United States. Just to give you an example: NFC is used in multiple European counties for the public transport (think about a bus, train, metro, etc.).

In Asia it is used for even more things. It's really the US who is lagging behind in this case.
Score: 6 Votes (Like | Disagree)

NightFlight
I am absolutely shocked that some people have automatically declared NFC a useless technology because you haven't SEEN it being used, and you'd never use it yourself merely because you don't even understand what it is capable of.

1. Travel outside of your country, particularly to Asia and some countries in Europe where it is used for everything from vending machines to public transportation.

2. Just because you think it is useless doesn't mean it is. How can you not be comfortable using it to pay for something?

3. I've seen it used myself in my area, where it is available at grocery stores, clothing retailers, and gas stations. I've seen people who I wouldn't label as a techie use it as well.


I love Apple but some of you apologists/loyalists are getting ridiculous. There was once a time when Apple had ALL of the cutting edge features, and their phones were HANDS DOWN the best for both their features, performance and for the software. Unfortunately, they've fallen behind on nearly all counts.

If the iPhone 5 doesn't impress me, my current 4S will sadly be my last iPhone.
Score: 5 Votes (Like | Disagree)
Read All Comments