No NFC in Next-Generation iPhone

With Apple having announced its new Passbook digital wallet for iOS 6, speculation regarding the potential for the incorporation of near field communications (NFC) in the next-generation iPhone has ramped up. The technology would allow for contactless payments that could be closely incorporated into the Passbook functionality. Rumors of NFC capabilities for the next-generation iPhone received another boost of speculation after photos of an assembled front panel surfaced showing an unknown square feature that Japanese blog Mac Otakara said was part of the NFC system for the device.

As part of an extensive analysis of likely features for the next iPhone, AnandTech laid out the case for why NFC is unlikely to appear in the device.

Given the primarily metal backside of the new iPhone, it's highly unlikely that NFC is in the cards for this generation. In fact, given the very little space at top and bottom dedicated to those glass RF windows, you can almost entirely rule it out. 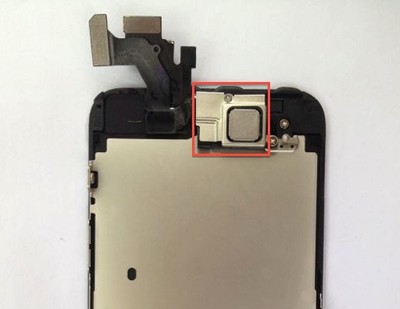 Next-generation iPhone front panel with feature incorrectly claimed to be for NFC (boxed in red)
The well-connected Jim Dalrymple has now added his perspective on the matter, sharing a simple "Yep" confirming that AnandTech was correct in its conclusion: There will be no NFC capabilities in the forthcoming iPhone.
[ 481 comments ]

nick_elt
whats funny is the fanboys say its overated and not taking off if its not in the next iphone, but if it is they will be going on and on about it how its the best thing since sliced bread
Score: 54 Votes (Like | Disagree)

Its a neat feature, but as others say it hasn't really taken off. Maybe it will soon?

Tinyluph
As someone who really doesn't care about a larger screen size this was one of the few features I was looking forward to.

barryl85
I think Apple can be the only ones to properly confirm this but if true this will upset a lot of people waiting for the new iPhone.

Personally I have the Samsung Galaxy S3 with NFC and have never even bothered to use it.
Score: 13 Votes (Like | Disagree)
Read All Comments

Monday May 17, 2021 6:06 am PDT by Joe Rossignol
Apple today announced that Apple Music will be gaining support for Spatial Audio with Dolby Atmos at no additional cost starting in June. At launch, Apple Music subscribers will have access to thousands of songs in Spatial Audio from artists like J Balvin, Gustavo Dudamel, Ariana Grande, Maroon 5, Kacey Musgraves, The Weeknd, and many others. Apple says this feature will provide a...
Read Full Article • 447 comments