UBreakiFix has received these photos of the full front panel of the next generation iPhone from one of their distributors. 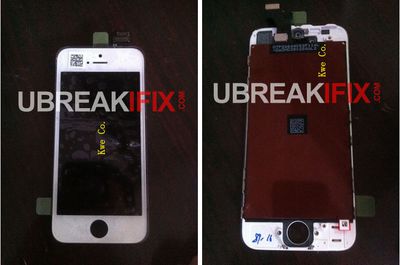 The parts don't appear to be particularly revealing. We've seen similar components before with the exception of a close look at the new iPhone's LCD screen.

The new screen is said to have increased to 4" in diagonal (up from 3.5") while preserving the same pixel density as the current iPhone design. This would provide apps with additional screen space to fill. UBreakiFix also provided a zoomed in photo of the top area with serial numbers and LCD connector.

The new iPhone is expected to be launched on September 12th.

nfl46
Whoever doesn't believe this is the new iPhone is in pure denial. I will be floored if Apple revealed something different than the leaks we've seen.
Score: 94 Votes (Like | Disagree)

appleisgod
The amount of leaks is getting ridiculous.
Score: 90 Votes (Like | Disagree)

Then why are all these rumors so consistent? If this ends up being the next iphone, which it will, many including myself will be very disappointed. Why do they feel they don't have to change anything drastically? And yes it needs it.

This is the most drastic generational change since it launched. I don't know what else you guys are expecting, and neither do you. Everyone fails to come up with an answer as to what would constitute a drastic change except a huge screen. Well, that's a user preference thing. Not everyone is going to be receptive to a 4.7" screen coming from a 3.5" screen so get over that idea.
Score: 72 Votes (Like | Disagree)

miles01110
After 5 years of the same thing, the proportions on the new one look awkward.
Score: 69 Votes (Like | Disagree)

jav6454
All these leaks are either a big red herring or Apple new security measures royally suck.
Score: 62 Votes (Like | Disagree)

GBrooks
'Introducing the new Apple 'Build your own iPhone' set! New parts available every week from a newsa- err, I mean rumour site near you!'
Score: 50 Votes (Like | Disagree)
Read All Comments

Sunday June 26, 2022 7:36 am PDT by Joe Rossignol
iPhone 14 Pro models are widely expected to feature always-on displays that allow users to view glanceable information without having to tap to wake the screen. In the latest edition of his Power On newsletter for Bloomberg, Mark Gurman said the feature will include support for iOS 16's new Lock screen widgets for weather, fitness, and more. "Like the Apple Watch, the iPhone 14 Pro will be...
Read Full Article • 127 comments