As we noted earlier this week when iOS 6 Beta 4 was released to developers, one of the newest features in the release was the addition of a "Wi-Fi Plus Cellular" setting to the General/Cellular control panel.

The setting appears to allow apps to fall back on the iPhone's cellular data connection when having difficulties moving data via the Wi-Fi connection, something that can happen with a weak Wi-Fi signal or a temperamental Internet connection. 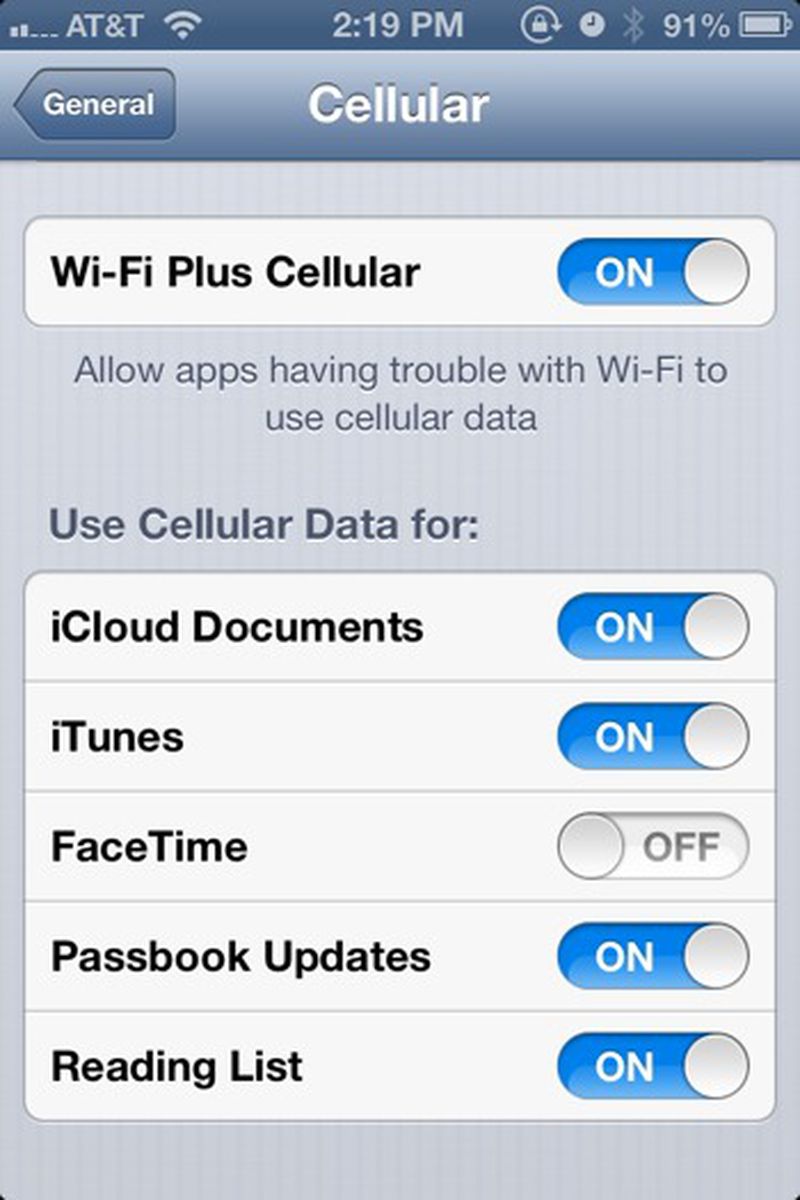 Less clear is the purpose of the series of controls below that. There are individual On/Off switches to use cellular data for iCloud Documents, iTunes, FaceTime, Passbook Updates and Reading List. Some believe these are a submenu setting for the Wi-Fi Plus Cellular control, allowing tasks such as downloading music from iTunes or syncing iCloud Documents to require the use of Wi-Fi -- forbidding some apps from connecting via Cellular Data while others are allowed to.

We've reached out to Apple for clarification and as it's still a beta release, restricted to 'developers', the settings could always change to be made more clear or removed entirely.

ajcadoo
YES! No more sitting in your driveway, with a 1 bar WiFi connection, seeing the spinny loading icon while loading the Maps app!
Rating: 20 Votes

prefekt
This is a welcome addition for anyone who finds that it takes wifi way too long to realize it actually doesn't have a signal.

Walk out the door on my way out of the house, it takes a good minute or two to kick itself off wifi.
Rating: 12 Votes

Kaibelf
"Less clear is the purpose of the series of controls below that. There are individual On/Off switches to use cellular data for iCloud Documents, iTunes, FaceTime, Passbook Updates and Reading List."

Ever heard of a data cap?
Rating: 7 Votes

babyj
So anyone know if this will work if you've got a good Wifi signal but internet access is blocked?

The problem I have is that I use free Wifi in McDonalds and Starbucks a lot. But you have to sign in to use it and due to them using BT OpenZone it also connects to any of their Wifi points it finds (which is like millions).

So I'll often totally lose the data connection as it switches to a Wifi connection that it can't actually connect to the internet over. It is a complete pain in backside and easily my biggest gripe with the iPhone.
Rating: 4 Votes

scionfriar
Hallelujah! I really hope this works as advertised. For anyone who walks around a "campus" environment could tell you, wandering just on the fringe of access points when going outdoors kills functionality of programs like iTunes Match.
Rating: 4 Votes

"Less clear is the purpose of the series of controls below that. There are individual On/Off switches to use cellular data for iCloud Documents, iTunes, FaceTime, Passbook Updates and Reading List."

Ever heard of a data cap?

Yes, of course I know about the data cap. What do the switches actually do?

Do they turn off ALL cellular data for iTunes (which seems redundant as there is already a switch for that) or does it only affect the Wi-Fi Plus Cellular switch?
Rating: 4 Votes

apple_iBoy
This would be a welcome feature that I've been pining after.

I work on a campus that uses a "captive portal" wifi system that requires frequent logins. As things work now, if I have wifi on, the phone connects to the network with great signal strength but has no Internet access until I switch to safari, try to load a page, and login. In the meantime, I get no mail, no streaming, no Google Voice txts, etc.
Rating: 3 Votes

BJMRamage
nice. i hated walking to the mailbox for it only to spin and spin...i get it, the WiFi signal is low, just switch already.
Rating: 2 Votes

I hope that's what they are aiming for.
Rating: 2 Votes
[ Read All Comments ]