In line with recent claims that European carriers have been stockpiling nano-SIMs with some carriers even working with Apple to test the new, smaller cards ahead of the next-generation iPhone launch, Nowhereelse.fr shares [Google translation] a set of comparison photos showing what is claimed to be a nano-SIM tray for the next iPhone next to the current micro-SIM tray used in the iPhone 4S. If the part is legitimate, it indeed confirms that Apple will be using the smaller SIM card form factor that it worked to push through standards approval earlier this year. 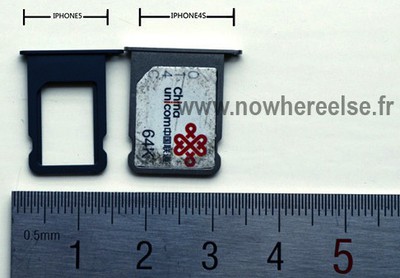 With new photos of the next-generation iPhone's SIM tray in hand, we have reexamined the photos from early May of what was also claimed to be the device's SIM tray, and we now believe that we were incorrect in our initial assessment that that part represented a micro-SIM tray nearly identical to that found in the iPhone 4S. While those photos did not show the side of the tray that holds the SIM card, the overall dimensions of the tray are in a ratio of roughly 1.55-1.6. This is in line with what is seen on the new nano-SIM tray shown by Nowehereelse.fr and different from the iPhone 4S micro-SIM tray that has dimensions in a ratio of approximately 1.37. The nano-SIM card itself has dimensions in a ratio of 1.4, compared to a ratio of 1.25 for the larger micro-SIM.

Consequently, it indeed appears has indeed been planning to use its proposed nano-SIM standard in the next-generation iPhone for a numbers of months, even before the standard was approved by the European Telecommunications Institute (ETSI).

Today's report also shares photos of what are claimed to be the white and black versions of the home button for the next-generation iPhone, and these photos are in line with previously-leaked photos from late April that represented the first of a number of part leaks claimed to be for the upcoming iPhone.

Zunjine
Please can we not have a naming debate in EVERY thread about the next iPhone? Please!?
Score: 17 Votes (Like | Disagree)


Some people just want to watch the world burn.
Score: 11 Votes (Like | Disagree)

Nozuka
in before: someone complaining about the name iphone5
Score: 11 Votes (Like | Disagree)


For the simple reason that it comes after the 4S. The "4" is what sticks in people's minds, not the fact that it's actually 5th generation.

It's irrelevant, though, as apple will probably drop numbers altogether.
Score: 10 Votes (Like | Disagree)
Read All Comments

Saturday July 31, 2021 12:13 am PDT by Tim Hardwick
Telegram Messenger has received a major update to its video capabilities, including support for video calls with up to 1,000 viewers. Group video calls in Telegram allow up to 30 users to stream video from both their camera and their screen, and now a maximum of 1,000 people can tune into the broadcast. Telegram says it intends to continue increasing this limit "until all humans on Earth...
Read Full Article • 52 comments

Saturday July 31, 2021 6:00 am PDT by MacRumors Staff
This week saw an interesting range of Apple news and rumors, including a blockbuster earnings report, rumors about next year's "iPhone 14" and Face ID coming to Macs, and more. Subscribe to the MacRumors YouTube channel for more videos. Other popular topics included Apple's crackdown on leaks, changes in the latest round of betas for iOS 15, iPadOS 15, and macOS Monterey, and several stories...
Read Full Article • 46 comments