As noted by CNET, Verizon Chief Financial Officer Fran Shammo made a comment during today's earnings release conference call that many are interpreting as a hint that the next-generation iPhone will be launching in the fourth quarter of this year.

Apple's next iteration of the iPhone could drop in the fourth quarter.

That's according to Verizon CFO Fran Shammo, who hinted at the possible timing during the company's quarterly conference call today with a vague reference to a major phone the carrier expects to launch in the fourth quarter.

Shammo's exact statement was captured by The Verge:

When asked what might have held customers back from upgrading their devices in Q2, Shammo said that "of course there's always that, uh, rumor mill out there with a new phone coming out there in the fourth quarter, so people may be waiting." While there's a chance that he was referring to the next Nexus phone, this felt more like a thinly-veiled reference to the oft-rumored "new iPhone." 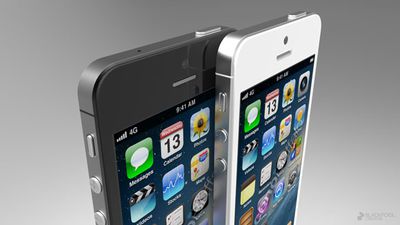 Rendering of next-generation iPhone based on leaked parts and rumors
Shammo could pass his comments off as simply an acknowledgment of the circulating rumors with no inside information coloring his perspective, but observers searching for any hints of Apple's plans are clearly wondering whether the timeframe mentioned by Shammo was indeed based on Apple's schedule.

Last year, Shammo spoke out several times on Apple's iPhone plans, confirming that what became the iPhone 4S would be a world-mode phone capable of operating on both GSM and CDMA networks and noting that Verizon would launch the device simultaneously with AT&T despite Verizon having launched the iPhone 4 midway through its lifecycle.


Can we please stop turning these threads into a naming battle :(
Score: 41 Votes (Like | Disagree)

FakeWozniak
Year after year, there has always been a new iPhone. It's inevitable. I just hope to see the iPhone 5 before the Mayan calendar ends.
Score: 37 Votes (Like | Disagree)


My money is on it being called "iPhone"
Score: 33 Votes (Like | Disagree)


I would love to downvote this. Build a bridge. And get over it.
Score: 22 Votes (Like | Disagree)

Raftysworld
Can we please stop calling it the iPhone 5? It's either the iPhone 6, iPhone 4GS, iPhone 4ST (T = Tall) or iPhone XL. iPhone 5 makes NO sense and would just cause all kinds of confusion.
Score: 12 Votes (Like | Disagree)
Read All Comments