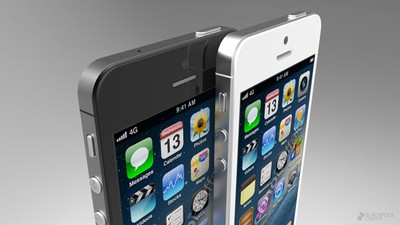 Bryce Haymond of Blackpool Creative has created a set of high resolution 3D renderings of the "iPhone 5" based on the circulating part leaks and diagrams.

There’s been quite a bit of hype recently in the Apple universe over the imminent announcement of a new iPhone, or rather the new iPhone (aka iPhone 5). Many of the biggest media outlets have already published photos and videos of “leaked” parts that are supposedly from the iPhone 5 as it makes its way into the manufacturing phase at Apple’s suppliers. I thought it would be fun to piece together these fragments to see what the iPhone 5 might look like when Apple makes the big announcement

Besides the video below, he's also created a zip of 76 high resolution images for download.

Apple will be taking the stage at WWDC next week, but most observers don't expect Apple to unveil the new iPhone at WWDC. The new iPhone is not expected to be introduced until the fall (September/October).

Ljohnson72
If the iPhone 5 does have a larger screen I REALLY hope it's not just an elongated screen.
Score: 44 Votes (Like | Disagree)

Ultimedia
Apple can only redesign the iPhone to a certain extend. I personally still like the iPhone 4 design and it's hard to fault it.

People expect a redesign just for the matter of redesigning something.
Score: 28 Votes (Like | Disagree)

Well knowing that this is a rendering that could be 100% fake, I will be disappointed if the next iPhone has a design that is extremely similar to the iPhone 4/4S.


There's only so much you can do...it's either taller, wider or thinner.

A tear-drop shape is not happening.
Score: 28 Votes (Like | Disagree)

appleguy123
I love my white iPhone, but if the back looks like that, I'm going to have to get a black one.


Leaks say it's on the bottom.
Score: 22 Votes (Like | Disagree)
Read All Comments

Thursday May 13, 2021 12:10 am PDT by Sami Fathi
Apple has fired Antonio García Martínez, an ex-Facebook product manager and author of the controversial book "Chaos Monkeys," following public and internal calls for removal and investigation due to past misogynistic statements, The Verge reports. Apple hired Martínez earlier this week to join its ads team, however, comments that Martínez made in the past sparked condemnation from users...
Read Full Article • 315 comments