Following Verizon's move to shared data plans last month, AT&T announced its own shift scheduled for late August. The new system offers a similar setup to Verizon's, with all plans including unlimited talk and text and monthly service pricing being based simply on the total data allotment and number and type of devices being used.

With AT&T Mobile Share plans, customers start by choosing how much data they want each month, then choose up to 10 devices to attach to their shared plan, one of which must be a smartphone. Each plan includes tethering and unlimited domestic calls and texts for smartphones and basic or quick messaging phones. The larger the data bucket you choose, the less you pay per gigabyte and the less you pay for each smartphone added to the shared plan 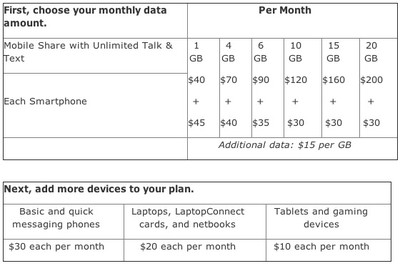 One wrinkle for AT&T's plans is a decreasing monthly smartphone device access cost as customers step up to higher data plans. While Verizon charges a flat $40 per month per smartphone, AT&T's starts at $45 for customers using just 1 GB of data but decreases to as low as $30 for accounts with 10 GB of data or more per month. Access costs for other devices are the same between AT&T and Verizon, with feature phones requiring a flat fee of $30 per month, laptop connections $20, and tablets $10.

AT&T is launching its new plans as of "late August", and current customers will not be required to switch to shared data, although they may do so without extending the length of their contracts. New customers will have the option of selecting from the new shared data plans or the carrier's existing individual or family plans.

jayhawk11
So if you're on the 450 Minutes plan, with unlimited text and 3GB of data, your bill just went up $20/month.

Can someone please make a prepaid that doesn't suck?
Score: 25 Votes (Like | Disagree)

I *think* I am saving money by going with the shared data if this truly does include unlimited minutes and messaging from reading this post. There has to be a gotcha, seems to good to be true.

So with the shared data plans I could go with the 4gb plan for $110 for two iPhones, correct?


Incorrect. You would be paying $70 + $40 + $40 = total of $150. Didja really think AT&T would allow you to save money?
This is price signaling/collusion at its finest folks. Welcome to corporate America.
Score: 18 Votes (Like | Disagree)

So if you're on the 450 Minutes plan, with unlimited text and 3GB of data, your bill just went up $20/month.

These are additional options, they're not replacing the existing plans.
Score: 11 Votes (Like | Disagree)

nick_elt
HOW MUCH? ha u guys are getting screwed from both ends! Such a big market yet everything seems so expensive. Wheres the competition?
Score: 9 Votes (Like | Disagree)

I *think* I am saving money by going with the shared data if this truly does include unlimited minutes and messaging from reading this post. There has to be a gotcha, seems to good to be true.

So with the shared data plans I could go with the 4gb plan for $110 for two iPhones, correct?

NoExpectations
At least AT&T is offering this as an option....I like choices.

Verizon is forcing this onto their customers.
Score: 7 Votes (Like | Disagree)
Read All Comments

Wednesday June 16, 2021 10:49 am PDT by Juli Clover
Apple CEO Tim Cook this morning participated in a virtual interview at the VivaTech conference, which is described as Europe's biggest startup and tech event. Cook was interviewed by Guillaume Lacroix, CEO and founder of Brut, a media company that creates short-form video content. Much of the discussion centered on privacy, as it often does in interviews that Cook participates in. He...
Read Full Article • 327 comments