While comparison photos of the iPad 2 rear shell and a claimed iPad 3 rear shell have shown slightly increased thickness for the forthcoming model and reports have suggested that the difference is roughly 1 mm, no measurements had surfaced to quantify the exact difference in thickness between the two devices.

Apple.pro now points [Google translation] to a new photo showing both shells being measured with a digital caliper. According to the photo, the iPad 2 rear shell measures in at 8.69 mm thick while the iPad 3 part comes in at 9.50 mm, a difference of 0.81 mm. 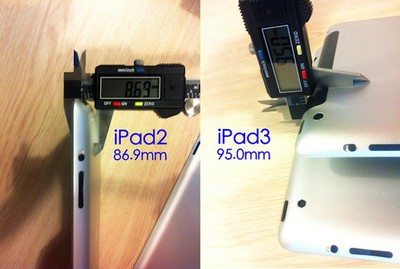 (Note: Text labels added by image poster are off by a factor of ten. Readings on caliper are correct.)
Apple's official iPad 2 specs peg the device at 8.8 mm thick, just slightly thicker that the rear shell itself, which wraps around the sides of the device. Given a nearly identical design for the iPad 3, the overall device would measure in at roughly 9.6 mm, or about 9% thicker than the iPad 2 but still well below the 13.4 mm thickness of the original iPad. Sources who have handled the iPad 3 rear shell suggest that the difference from the iPad 2 will be nearly imperceptible to users.
Related Roundup: iPad
Tag: apple.pro
Buyer's Guide: iPad (Neutral)
Related Forum: iPad
[ 169 comments ]

WannaGoMac
Geesh forget it then!

CZSZSZ
So it is over 3in thick?

How can I trust these measurements if someone can not even write down the result?
Score: 14 Votes (Like | Disagree)

HarryKeogh
I hope no one mistakes my iPad 3 for a cinder block.
Score: 11 Votes (Like | Disagree)

rmwebs
Those pictures are a bit of a fail.

MonkeySee....
Cue the next Samsung ad with a a guy with massive comedy hands trying to hold onto the iPad 3 due to its increased thickness.
Score: 8 Votes (Like | Disagree)
Read All Comments

Monday May 10, 2021 10:41 am PDT by Juli Clover
Apple's upcoming iPhone 13 models will be slightly thicker than the iPhone 12 models and will also feature larger, thicker camera bumps with lenses that protrude less, according to iPhone 13 schematics seen by MacRumors. The new iPhone 13 and 13 Pro models are expected to feature a thickness of 7.57mm, up from 7.4mm in the iPhone 12 models. That's an increase of 0.17mm, which won't be hugely ...
Read Full Article • 202 comments