Over the past few days, Digitimes has posted a series of rumors from its own supply chain sources and other reports out of Asia discussing a number of modifications reportedly being made by Apple on the third-generation iPad. Apple is said to already be making some of the changes, with a public launch of the revised model set for later this year. The changes include:

- As we mentioned in passing earlier this week, Digitimes last week cited a report from Taiwanese publication Apple Daily claiming that Apple is preparing to shift to thinner indium gallium zinc oxide (IGZO) display technology for the third-generation iPad. Apple had been rumored to be using IGZO in the new iPad in the months leading up to its launch, but the panels were not ready in time.

- Just yesterday, Digitimes reported that Apple has already made several tweaks to the third-generation iPad, enlarging the lens hole for the camera and modifying the battery. The changes to the battery are said to be intended to reduce overheating while also allowing for a lighter and thinner design.

The sources said the new iPad's battery is being revised, which will help prevent overheating issues and could possibly make the device slightly lighter and thinner than previously designed. However, no comments were offered as to why the lens is being enlarged.

The report also reiterates claims of IGZO displays coming to the iPad, with the revised models reportedly set for launch in time for the holiday shopping season later this year.

- And now today Digitimes is reporting that Apple is also moving from two LED backlight units to one, an effort that will reduce overheating and along with the battery changes will support the thinner design.

The extra LED is reportedly adding to overheating and that using one LED will help solve overheating issues since more backlights along with more power to heat those backlights is causing overheating.

Sources noted that the one LED backlight module, however, will not affect luminosity and clarity of Apple's Retina Display.

Taken together, all of the changes cited by Digitimes would make for much more than a mere tweak of the existing iPad design, and it seems extremely unlikely that Apple will release an updated model of the iPad before the end of the year.

Many readers may remember that similar claims of a shorter upgrade cycle for the iPad surfaced last year, only to see Apple continue its yearly upgrade cycle and wait until early 2012 to introduce the third-generation iPad.

Digitimes has been under fire in recent months due to its increasing reporting of rumors that have turned out to be inaccurate. While the site has occasionally offered very accurate information, it has become increasingly difficult to determine which claims to believe.

While talk of an "iPad mini" launch later this year has been ramping up, it seems hard to believe that Apple will be making any changes to the current 9.7-inch iPad before next year, and thus we are extremely skeptical of these claims. Consequently, we are posting this on our iOS Blog primarily for interest and discussion. 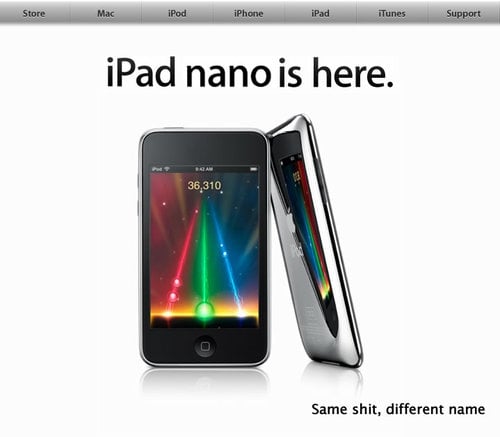 keysofanxiety
With the greatest of respect, I get a little annoyed when people cite Digitimes as having 'accurate rumours' in the past. I mean, it's a Retina Display on a MacBook. They did it with the iPhone, then with the iPad. Not to mention all the high-resolution icons leaked in Mountain Lion & Lion. And this is Apple; they're quite obviously going to try to make a laptop thinner.

What I'm trying to say is that anything they've accurately reported has been nothing short of common-sense. Anything vaguely 'out there' that they've suggested has almost never happened.

I'd be willing to suggest that most people on MR are better at speculating about what Apple will do next.
Score: 11 Votes (Like | Disagree)

wickerman1893
Too many products was one of the main reasons for Apple's fall in the late 90's. The more products you have leads to more confusion, IMO anyways. If they do make a iPad mini, they are going to have to get rid of the iPod touch as there will be no reason to buy one because the price point will have to be below the iPad. Very few people would buy a 32GB iPod touch instead of a 16GB(or even 8GB) iPad Mini. That's just my two cents. One thing Apple has now that they didn't have in the late 90's is leadership. Hopefully whatever they are doing turns out to be great.
Score: 5 Votes (Like | Disagree)

I'd be willing to suggest that most people on MR are better at speculating about what Apple will do next.


I'll have a try: They will come out with a new iPhone this fall with a longer display, same width. It will have a metal back, a thinner display, a better battery and quadcore graphics. You can get it in black or white. It will have 4G and a virtual wallet with short distance transactions. The headphone jack will be at the bottom and they come with a new connector. Most likely, they also come out with a smaller sized iPad.

Do I win a prize? Do I get cited all over because I was able to read rumors? Please, please? :D
Score: 3 Votes (Like | Disagree)

iMcLovin
I dont care. and you know even if apple is gonna make a smaller ipad, it´s gonna be costly, because its Apple. So, I don´t really see what market this will take which they don´t allready own. I dont need anything inbetween my iphone and ipad.

anyway, it´s good rumors. Because I think they are highly unlikely...which makes it seem more probable that Digitimes rumors about the coming october retina imac is untrue - that increase my hop of an earlier release of the iMac.
Score: 3 Votes (Like | Disagree)

I'd be willing to suggest that most people on MR are better at speculating about what Apple will do next.

No, they are not.

A few commenters here and at AppleInsider have more plausible ideas about what Apple might have in terms of product updates, but the vast majority of readers on most technology blogs have zero understanding about the design and manufacturing process of today's consumer electronics and even less understanding about basic economics.

The majority of commenters appear to be teenagers or college students and random other types who have never worked at a Fortune 500 technology company and have zero insight into how a thoughtfully managed publicly-owned corporation would actually go about handling their product lineup and their supply chain partnerships.

Now, I'm not saying that one needs to have worked at Apple, HP, Dell, Oracle, Cisco, etc. to be a contributing member of a technology bboard, however, some of the people who comment here have very tenuous grasp on the real world, i.e., the one that mommy and daddy aren't paying for.

That said, some of these outlandishly unrealistic predictions can be quite amusing. Too bad that those who make them are perpetually disappointed about probably everything in their lives. They're the kind of people who think they should be dating supermodels like Brooklyn Decker or Kate Upton. Even more hilarious is the palpable sense of entitlement that these people exude.

These forums have never been as entertainingly ridiculous as today. MacRumors makes for some great science fiction, far better than Battlestar Galactica, Serenity, whatever.
Score: 3 Votes (Like | Disagree)
Read All Comments