Back in February, iMore reported that Apple was working on a smaller dock connector for its iOS devices, seeking to shave the size of the current 30-pin connector in order to allow its devices to shrink further and to provide space for other components.

Rumors of the smaller dock connector have persisted in the months since, and with claimed rear shells for the next-generation iPhone showing a smaller opening for the dock connector it does appear that Apple will be rolling out the new design with its next iOS device launch.

TechCrunch now reports that it is hearing more about the smaller connector, including word that it will include 19 pins for connectivity.

Although the form factor and actual size are still unknown, TechCrunch has independently verified that Apple is working on adding a 19-pin port, replacing the current 30-pin port, to the new iPhone. It is a move that will surely send shocks through the iPhone accessory ecosystem.

TechCrunch's report comes as Mobile Fun shares several case drawings and renderings from a case manufacturer who is betting that the parts leaked so far will prove to be genuine.

One manufacturer we spoke to said that he was sure that the leaked images were accurate – so sure that he was already preparing to construct iPhone 5 cases and he’d be willing to ship replacements for free if they turned out not to be perfect. He enumerated three big changes from the old iPhone 4S to the iPhone 5: 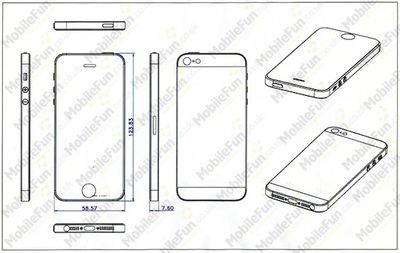 Based on the post, the drawings and renderings seem to have been created by the case manufacturer as it works to design its cases for the already-leaked form factor, and thus do not appear to be actual design leaks from Apple's supply chain.

Case designs were of course one of the primary sources for rumors of a dramatic "iPhone 5" redesign last year, a design that did not come to pass as Apple kept the basic iPhone 4 form factor and instead upgraded the internals to yield the iPhone 4S.

But the situation is different this year, with the rumors being driven by what appear to be legitimate leaks of actual parts and case manufacturers now responding to those leaks rather than driving the rumors themselves in the absence of part evidence as they did last year.

Update: Robert Scoble has added his thoughts in a comment on TechCrunch's post, claiming that he has learned from an industry contact that Apple's new dock connector will be magnetic much like the MagSafe connector used on Mac notebooks and that it will include chips to verify licensing of accessories to be used with the devices.

clibinarius
It makes sense, if they're going USB 3, why not change it already? Especially with Ivy Bridge...

I wish it is MicroUSB though. A universal connection would be lovely.
Score: 24 Votes (Like | Disagree)

Benjamins
the "iPod" connector as been the same for more than 10 years already. Change is just a matter of time.
Score: 22 Votes (Like | Disagree)

I'm ready for change... Let's hope for speed increase with the new connector:cool:

And what's with the headphone jack being on the bottom? Why make such a silly change?


That's where heaphone jack should have been at the very begining. At the bottom.
Score: 19 Votes (Like | Disagree)

Just don't make the back out of glass! Why have both sides shattered when just the front will do ;)


I must be the only one that likes the glass back. The thing is glass doesn't scratch the way metals do, but is far more appealing to the touch than plastic. The whole glass shattering thing doesn't make a difference to me because I never want my phone to drop anyways. Reducing the chance that you'll damage something to a coin toss doesn't make dropping it any less disastrous in my eyes.
Score: 19 Votes (Like | Disagree)

there is already a natural way in putting and removing phones from ones pocket?

what kind of flippity flop move do you do when you remove the phone from your pocket?

if im holding an iphone right side up it uses less of the cable length to have the headphone jack on the top (except if its bottom is aligned with ears). When i put the phone right side up in my pocket then the issue with cable length becomes more serious because in a loose pocket the iphone can rotate to the "natural pocket position" and the cable isnt really long enough.


I'll put it in steps for you:

Hold you phone to your ear the correct way up.

Now, without changing grip, put your hand straight into your pocket.

Which way up is it? Yep. Upside down.

My friend, you are the one performing a flippity flop move.
Score: 15 Votes (Like | Disagree)
Read All Comments

Tuesday October 4, 2022 3:30 am PDT by Hartley Charlton
The European Parliament today voted overwhelmingly in favor of enforcing USB-C as a common charging port across a wide range of consumer electronic devices, including the iPhone and AirPods, by the end of 2024. The proposal, known as a directive, forces all consumer electronics manufacturers who sell their products in Europe to ensure that a wide range of devices feature a USB-C port. This...
Read Full Article • 310 comments