9to5Mac reports that iPhone repair firm iFixyouri has received information on a new part claimed to be the rear shell for the next-generation iPhone. The part is reportedly made of an aluminum alloy that integrates both the rear panel and sides for the device. 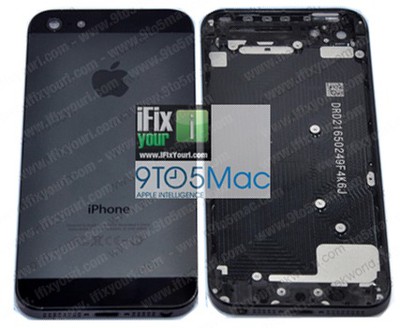 Notably, the part is relatively consistent with previous claims that the next-generation iPhone would integrate a "metal panel" to the center section of the device's back, but in reality the panel appears to simply be a different finish applied to that portion of the casing.

With the part also including the device's edges, a port for a smaller dock connector can also be seen, as well as larger speaker and microphone grills. The part's source claims that Apple will take advantage of the space freed up by shrinking the dock connector to enhance speaker performance in the next-generation iPhone.

Finally, the supplier claims that the part is showing up not only in black and white, but also in two other unspecified colors, although it is unclear whether those colors would make it to final production.

Update 2: Repair firm uBreakiFix has also received photos of what may be the same part in white. The "iPhone" font on the shell appears to be somewhat suspicious, seemingly of a lighter stroke and/or looser spacing between the letters. But otherwise the part appears identical to the previously-posted part, which seems to carry a more typical "iPhone" typeface.

I think its time to sack Jony. That looks hideous


A lot of people on this forum said the same thing about the resigned iPhone 4.

I'll wait to see it in my hands to pass final judgement - but I like it so far.
Score: 29 Votes (Like | Disagree)

The headphone jack on the bottom is... odd.

The headphone jack on the bottom makes the most sense from a usability standpoint.

When I listen to music and use my iPhone 4 at the same time, the cord gets in the way of the screen sometimes because of the fact that the headphone jack is at the top. Put the headphone jack on the bottom, and this is no longer an issue.
Score: 21 Votes (Like | Disagree)

GeekLawyer
The headphone jack on the bottom is... odd.
Score: 21 Votes (Like | Disagree)

Looks like this thing is coming out at the end of June...

Guess fall will be the 7" iPad release then.


No, it's not coming out in June. Apple hasn't even released a beta of iOS 6 (which will take months to reach the final version). They haven't released a new iPhone without a new OS ever.
Score: 15 Votes (Like | Disagree)

2 weeks until iOS 6! So excited to hear whats coming from Apple.
Score: 14 Votes (Like | Disagree)
Read All Comments

Friday June 18, 2021 9:41 am PDT by Sami Fathi
After a long wait, YouTube for iOS is officially gaining picture-in-picture support, allowing all users, non-premium and premium subscribers, to close the YouTube app and continue watching their video in a small pop-up window. In a statement to MacRumors, YouTube says that picture-in-picture is currently rolling out to all premium subscribers on iOS and that a larger rollout to all US iOS...
Read Full Article • 196 comments

Monday June 21, 2021 7:17 am PDT by Hartley Charlton
Users appear to be underwhelmed by Apple's upcoming iOS 15 and iPadOS 15 updates, according to the findings of a new survey by SellCell. The survey asked 3,000 iPhone and iPad users, evenly split between men and women, aged 18 or over in the United States, what they thought of iOS 15, iPadOS 15, and the naming of the upcoming iPhone 13 lineup. Over 50 percent of all of the survey's...
Read Full Article • 371 comments

Monday June 21, 2021 7:07 am PDT by Joe Rossignol
Following widespread reports that the iPhone 12 mini has experienced poor sales performance, at least relative to other iPhone 12 models, Taiwanese research firm TrendForce today claimed that production of the device has already ended. According to TrendForce, the iPhone 12 mini "reached End-of-Life ahead of time" during the second quarter of 2021, suggesting that Apple will focus on selling ...
Read Full Article • 176 comments