iMac Update Might Be Coming Sooner Rather Than Later

Back in mid-May, a pair of Geekbench 2 benchmarks that claimed to be from unreleased MacBook Pro and iMac models appeared, setting off speculation that updates to both lines might be imminent if the entries were indeed legitimate. But with Apple not updating the iMac earlier this week at its Worldwide Developers Conference keynote, those looking for an upgraded all-in-one desktop Mac have been left waiting.

With updated MacBook Pro models reaching the public, Primate Labs highlighted some of the benchmarks yesterday, and the details for the non-Retina 15-inch MacBook Pro match up nearly exactly with what appeared in the entry from last month, all but confirming that it was indeed a legitimate leak.

Now with that information in hand, it pays to revisit the iMac benchmark that appeared around the same time, and while the two benchmarks aren't necessarily linked, it could generate hope that an updated iMac may still be right around the corner. The iMac benchmark referred to an "iMac13,2" model running a 3.4 GHz Core i7-3770 quad-core processor with 4 GB of 1600 MHz RAM, and while it is possible that the information could have been faked, Primate Labs previously reported that it believes the entry to be legitimate. 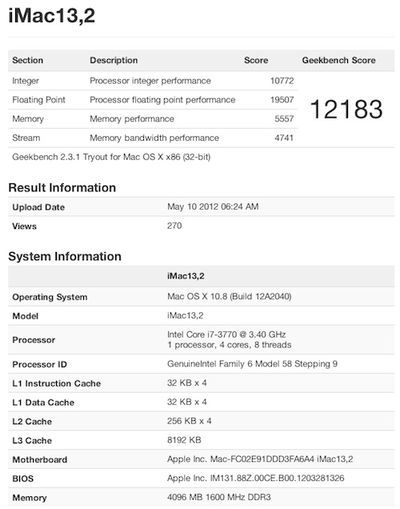 Further fueling speculation of a near-term iMac update is recent confusion in which it was initially reported that Apple representatives had told reporters that new iMac and Mac Pro models would likely be arriving in 2013. But following publication of those reports, Apple press relations staff specifically clarified those remarks to note that only the Mac Pro would be seeing the 2013 update. The assumption related to that clarification is of course that an iMac update is very likely to come sooner than the end of this year.

It has already been over 400 days since the iMac was last updated, and Ivy Bridge processors appropriate for the iMac have been available since late April. Consequently, it seems likely that the iMac will still be receiving an update in the relatively near future despite not making an appearance at this week's conference.

As for what improvements the next-generation iMac will see beyond Ivy Bridge, at least one mainstream news report has claimed that Apple is working on Retina displays for the iMac, although we previously analyzed how daunting of a task it would be to support four times the number of pixels found on the current models, particularly on a 27-inch display. Other sources have claimed that Apple is working on anti-reflective glass for the iMac, rumors that may have gained some support with Apple having touted this week that the Retina MacBook Pro's display produces 75% less glare than non-Retina models.

CrAkD
I bet along side mountain lion
Score: 24 Votes (Like | Disagree)

840quadra
This would make sense considering the processor and core changes to the Macbook line, and how both the Macbook and iMac share similar architectures to begin with.

I am totally in the market for a new iMac to replace a G5 system at my Parent's house, but I really would like to have the inclusion of USB3 and other tweaks.

Really hoping the 'sooner' is within a month or two!
Score: 21 Votes (Like | Disagree)

For those of you who are anxiously awaiting an update of the iMac, I have a different question: why? What does it do for you that a MacBook Pro and a display would do for you?

I don't see any features that the iMac has that the MacBook doesn't have. Please educate me.

I have a several year old iMac that had its hard disk fail. Repairing it was such a miserable task that I just decided to run off an external disk as my main disk. Grrr. With the MacBook Pro (not Air or Retina), maintenance is easy and I wouldn't have has a problem replacing the hard disk.

Unless there is something I am missing here, I cannot imagine buying another iMac.

We don't buy to wait for something to break down..you have to send it for repair anyhow son what difference does it make for the UPS man to pickup a iMac or macbook?