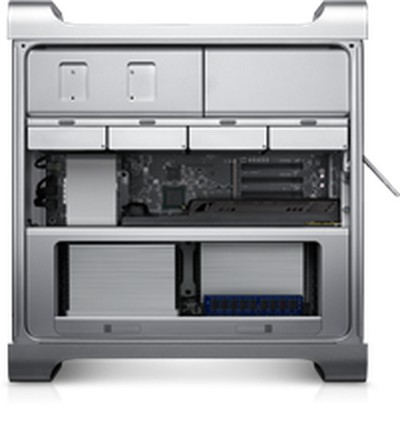 According to New York Times technology columnist David Pogue, Apple still believes in desktop Macs, including both the iMac and the Mac Pro.

The Mac Pro in particular has raised the ire of some Apple fans because it has been several years since the last update, and the update today was extremely minor.

Many Apple observers also wonder if Apple thinks that desktop computers are dead, since not a word was said about the iMac and Mac Pro. An executive did assure me, however, that new models and new designs are under way, probably for release in 2013.

Updated Xeon E5 chips were released in March, but the Mac Pro update released today strangely didn't include them.

The company late last year was reportedly "questioning" the future of the Mac Pro line, examining whether it should continue offering the professional-level workstation as sales have declined amid a continued shift toward notebook machines and specs that had gone stale while waiting for Intel to release updated processors. With Pogue's post today, however, the future of the Mac Pro seems slightly more assured.

Update: A MacRumors reader writes in to share an email he received from Apple CEO Tim Cook after he asked about the future of the Mac Pro:

Our pro customers are really important to us...don't worry as we're working on something really great for later next year.

Durendal
What a massive load of hairy horsecrap. What possible reason would Apple have to wait that bloody long? The parts are available! It's possible that the Mac Pro is waiting on the availability of GTX 670/680 parts in sufficient quantities, but the iMac? There's no reason for it to wait that long. I give it a couple of months, tops.

Also, what the hell was "new" about the Mac Pro today?
Score: 78 Votes (Like | Disagree)

Big-TDI-Guy
You know what would instill faith? APPLE telling pro users that they will continue to support them. Its not like that information would benefit the competitors to any significant degree, and I'm positive it would put the minds of those who DEPEND on this tool for a living, at ease.

Getting this info exclusively from third parties borders on insulting.
Score: 70 Votes (Like | Disagree)

Can I curse on this forum? (Serious question).

LethalWolfe
Another 12-18mo for the Mac Pro herd to thin out even more so Apple can eventually say, 'Well, there's just not enough demand so it's not fiscally responsible to keep manufacturing and offering Mac Pros."
Score: 56 Votes (Like | Disagree)

stangaroo
Did I read the "lack of thunderbolt" correctly in the specs!?

What a massive load of hairy horsecrap. What possible reason would Apple have to wait that bloody long? The parts are available! It's possible that the Mac Pro is waiting on the availability of GTX 670/680 parts in sufficient quantities, but the iMac? There's no reason for it to wait that long. I give it a couple of months, tops.

Also, what the hell was "new" about the Mac Pro today?

Has Apple gone collectively insane? Do they think people would have stopped buying yesterday's or even today's Mac Pro had they just announced publicly that they are working on a new one - instead of «leaking» it to David goddam Pogue??!

Nobody was buying Mac Pros yesterday, and hardly anybody will be buying one today. At least not people who need a Mac Pro, they already got something very similar 2 years ago! For more or less the same price too! (in fact it was cheaper before, if one is in Europe)

The «upgrade» today was completely disrespectful, insulting. So is not giving a roadmap for the Mac Pro.

Even more so is this dumbass leak to Pogue.

Mac Pros aren't bought on a whim and the average unit price is ~5000USD with the required internals (RAM+HD+etc) and on a somewhat steady upgrade cycle, one would buy the Mac Pro when one needs a Mac Pro.

One does not buy a 2+ year old Mac Pro at 2+ year old prices, with no roadmap, no guarantees, just a word from an unnamed Apple exec. to David dingaling Pogue.

Who wants to shell out 5000 bucks on a machine series that may or may not be upgraded every 3+ years? Anyone want to commit?

And it's guaranteed that the producer (Apple) will keep you, the customer, absolutely clueless on any future plans for no particular reason.
Score: 49 Votes (Like | Disagree)
Read All Comments