As noted by The Verge, the European Telecommunications Institute (ETSI) today announced it has adopted a standardized design for the next-generation "nano-SIM". The new design is 40% smaller than the current micro-SIM standard.

Today's SIM card designs take up a significant amount of space inside a mobile device. This space is more and more valuable in today's handsets which deliver an ever increasing number of features.

The fourth form factor (4FF) card will be 40% smaller than the current smallest SIM card design, at 12.3mm wide by 8.8mm high, and 0.67mm thick. It can be packaged and distributed in a way that is backwards compatible with existing SIM card designs. The new design will offer the same functionality as all current SIM cards.

The design selection was heavily contested, with a proposal from Apple being opposed by a number of other mobile phone manufacturers despite Apple having the support of many European carriers. As the selection process continued, Apple slightly tweaked its design while the opposing carriers made changes to their own proposal that brought their design much closer to Apple's. 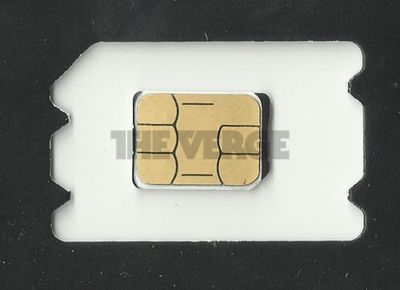 Prototype of Apple's proposed nano-SIM design inside outline of a mini-SIM card (Source: The Verge)
The Verge notes that by the time final selection was made the only difference in external design between the two proposals was a notch included in the side of the card proposed by the coalition of manufacturers opposing Apple. And with the ETSI yet to publish any other details on the approved design beyond overall measurements, it is not yet clear which design won out.

Unfortunately, both Apple's design and the more recent Motorola / RIM compromise design are exactly the same exterior dimensions — the only difference is that the update submitted by Apple's competitors includes an extra notch to enable so-called "push-push" mechanisms in SIM slots that wouldn't necessitate a tray. Until ETSI publishes the specs, we won't know which of the two was chosen.

The ETSI specifically refused to comment on which group's design was chosen, noting only that a collective decision by the industry yielded the final standard.

Apple has won a battle over the standard for a smaller SIM card, use of which would leave more room for other components in future phone designs. [...]

sachamun
Try not to inhale when installing it.
Score: 67 Votes (Like | Disagree)

You taking your SIM card out frequently?


I go frequently to France and Italy so I have 3 SIM's, this two and the Spanish one.

So yes, the smaller the SIM the easier is losing it
Score: 29 Votes (Like | Disagree)

roadbloc
Hooray! Another small item for me to lose.
Score: 28 Votes (Like | Disagree)

I go frequently to France and Italy so I have 3 SIM's, this two and the Spanish one.

So yes, the smaller the SIM the easier is losing it


I guess in Europe its a whole different ball game than in the states.
Score: 24 Votes (Like | Disagree)

Hooray! Another small item for me to lose.


You taking your SIM card out frequently?
Score: 23 Votes (Like | Disagree)

You taking your SIM card out frequently?


Of course. When I go abroad.
Score: 17 Votes (Like | Disagree)
Read All Comments

Monday November 29, 2021 7:38 am PST by Sami Fathi
In association with CIT as the financing partner, Apple has launched a new Mac Upgrade Program for small businesses and Apple business partners that allow companies to easily distribute and upgrade their fleets of MacBooks at an affordable price to all of their workers. As outlined on CIT's website, shared by Max Weinbach, Apple Business Partners can distribute the 13-inch MacBook Pro,...
Read Full Article • 83 comments

Tuesday November 30, 2021 8:08 am PST by Joe Rossignol
Apple plans to release a third-generation iPhone SE in the first quarter of 2022, according to Taiwanese research firm TrendForce. If this timeframe proves to be accurate, we can expect the device to be released by the end of March. As previously rumored, TrendForce said the new iPhone SE will remain a mid-range smartphone with added support for 5G:In terms of product development, Apple is...
Read Full Article • 94 comments