Earlier this week, we noted that Apple had offered royalty-free licensing of its proposed design for next-generation "nano-SIM" cards for use in devices connecting to cellular networks, on the condition that its design be selected and that other rights holders offer similar licenses to encourage adoption. 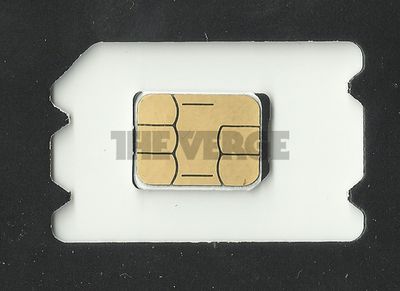 Prototype of Apple's proposed nano-SIM design inside outline of a mini-SIM card (Source: The Verge)
But as reported by FOSS Patents, the European Telecommunications Standards Institutes (ETSI) has postponed any vote on selecting a standard as the various companies proposing designs continue to squabble over the issue.

According to the report, the participating companies have failed to reach an agreement and decided not to hold the envisioned vote. In accordance with ETSI rules, the vote will now have to be postponed by a minimum of 30 days.

It appears that Nokia's overt unwillingness to license its potentially essential patents in the event that Apple's nano-SIM proposal is adopted and Sandisk's resistance to Nokia's proposal have resulted in an impasse. Sandisk, too, holds patents that may be essential to a new SIM card standard.

Apple is also coming under fire from the other participants in the negotiations, with Research in Motion accusing Apple of hiding its efforts to stack the voting panel by having at least three of its employees re-register for voting purposes as representatives of various carriers.

The RIM letter, which was submitted Wednesday, states that RIM over last few days has observed a number of people from one company changing their affiliation and registering to the meeting representing a completely different company. But voting by proxy during a technical body meeting is not allowed, according to RIM.

The letter highlights four examples, including three supposed Apple employees who have registered for Bell Mobility, KT Corp. and SK Telekom. Since voting by proxy isn't allowed, they should not be allowed to take part in the proceedings, according to RIM.

Apple's proposal is supported by most of the carriers, although it is unclear exactly what Apple's justification is for changing the registered affiliations of its representatives ahead of the previously-planned voting.

hary536
Seems you don't read the articles fully or don't follow the story correctly.
In the leaked docs, it was shown that Apple's proposal actually increases the total area of the sim area(with the required tray). So though actual Sim size is smaller, it requires a tray which in turn increases the space rather than what many uninformed folks like you believe.
Go and read the leaked documents on The Verge or on MacRumors.(not sure, if it was published here).
Nokia's design actually reduces the total sim area giving the benefit of more space for battery and other components as you mentioned.
Open your eyes and ears and then comment.

RIM is going to complain because their marketshare is slipping rapidly. Apple & Android dominate the US marketplace. Other companies do not have the nearly inexhaustible supply of funds for R&D or to build their specialized machines and factories around a specific design.

This would benefit Apple by enabling them to put more buttons and/or more battery in the area comprised by the current SIM. Other companies, who are hard pressed to make their phones smaller, but maintain battery life and/or without getting overly hot (or melting their plastic components) the way Apple can, because they cannot keep up on the development end.

If I were one of the competing companies and I knew that the smaller SIM would in no way benefit my product, but would give a competitive edge to my greatest competitor, Apple, I'd vote against it, too.

Apple will have to come up with another enticing carrot for the competitors if they're going to agree and bite. Android might be on board, but the other smaller manufacturers probably don't see why giving their big competitors more of an edge against them is a smart move.

I dont see why they wont just switch to a Nano sim, will benefit everyone as will free up space and apple have said that they will give the free license out?..

No Brainer to be honest...


Go and read the actual leaked docs and then see whose design actually frees up the space. You will be surprised to know that you were sleeping till now.
Score: 19 Votes (Like | Disagree)

Tones2
I guess all you fanboys are just ignoring the portion of the story where Apple is attempting to manipulate the voting process. Yes, ignorance is bliss....:rolleyes:

androiphone
as long as you can use an adaptor to make it a full size sim card so you can switch it to any other phone, I don't care which one wins.

I definitely never ever want no sim at all, what do you do if you you want to take a cheap rubbish phone on a night out?
Score: 15 Votes (Like | Disagree)

foodog
Raise your hand if you are sick of the endless patent BS!
Score: 13 Votes (Like | Disagree)

Consultant
SIM cards allow easy switching of phones, but not sure how applicable it is in today's smartphone world.

Inakto
I guess they will have to include tweezers and a magnifying glass along with the sim- eject tool in the iPhone 5.
Score: 9 Votes (Like | Disagree)
Read All Comments